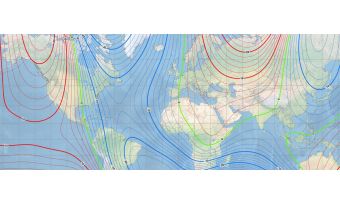 The World Magnetic Model is a joint product of the United States’ National Geospatial-Intelligence Agency (NGA) and the United Kingdom’s Defence Geographic Centre (DGC). The WMM was developed jointly by the National Geophysical Data Center (NGDC, Boulder CO, USA) (now the National Centers for Environmental Information (NCEI)) and the British Geological Survey (BGS, Edinburgh, Scotland). As part of the regular update cycle of the World Magnetic Model, NCEI, in collaboration with the British Geological Survey will release the WMM2020 on 10 December 2019.

The World Magnetic Model is the standard model used by the US Department of Defense, the UK Ministry of Defence, the North Atlantic Treaty Organization (NATO) and the International Hydrographic Organization (IHO), for navigation, attitude and heading reference systems using the geomagnetic field. It is also used widely in civilian navigation and heading systems. The model, associated software, and documentation are distributed by NCEI on behalf of NGA. The model is produced at 5-year intervals, with the current model expiring on 31 December 2019.

Change of the Magnetic Field

Earth’s northern magnetic pole is moving quickly away from the Canadian Arctic towards Siberia. This movement has forced NCEI’s scientists to update the World Magnetic Model (WMM) mid-cycle, NOAA, National Centers for Environmental Information reports. Due to unplanned variations in the Arctic region, scientists have released a new model to more accurately represent the change of the magnetic field.

Typically, a new and updated version of the WMM is released every five years. With the last release in 2015, the next version is scheduled for release at the end of 2019. Due to unplanned variations in the Arctic region, scientists have released a new model to more accurately represent the change of the magnetic field between 2015 and now. This out-of-cycle update before next year’s official release of WMM2020 will ensure safe navigation for military applications, commercial airlines, search and rescue operations, and others operating around the North Pole.

Uses of the WMM

Airport runways are perhaps the most visible example of a navigation aid updated to match shifts in Earth’s magnetic field. Airports around the country use the data to give runways numerical names, which pilots refer to on the ground. “The declination has changed just over 2.5 degrees over the past 22 years since Denver opened,” Heath Montgomery, the international airport’s former spokesperson, said after the last update.

Compasses use declination (the difference between true north and where your compass points) to help correct navigation systems for a wide variety of uses. As Earth's magnetic field evolves between the 5-year release schedule of the WMM, these predicted values can become off as the rate of change in Earth's magnetic field evolves due to unpredictable flows in Earth’s core. The north polar region is experiencing one of these erratic changes.