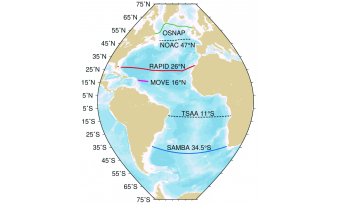 Planet Earth is heating up, yet temperatures are dropping in one area in the North Atlantic. This phenomenon, known as a ‘warming hole’, has been partly attributed to a slowdown in the thermohaline circulation or Atlantic meridional overturning circulation (AMOC) – a deep-ocean process that plays a key role in the heat transport in Earth’s climate.

The AMOC is expected to slow down in a warming climate, but how fast and how strong is rather uncertain. Nowadays, the ocean current is measured across the full width in certain places (see image; the dotted lines show projects that are not yet operational), but such measurements only started relatively recently. For example, the measurements in the northern part (called OSNAP) began in 2014 and the first results were published just last year, so it is too early to identify any real trends. Moreover, due to considerable short-term variation, it may take a while before the underlying trend can be distinguished from the natural fluctuations.

Densification of waters east of Greenland

Another noteworthy observation has been described by the Royal Netherlands Institute for Sea Research (NIOZ). A new international study involving scientists from 16 research institutions from seven countries has found that the AMOC is primarily driven by densification of waters east of Greenland, rather than west of Greenland. This is has led to renewed discussion about the importance of these areas, as model studies have focused mostly on the area west of Greenland.

NIOZ is responsible for some of the OSNAP measurements and its ship, the RV Pelagia, is currently on its way for the biannual voyage past its measuring equipment. Data from summer 2018 to summer 2020 will be recovered and a new set of instruments will be deployed for the next two years. The team is maintaining a blog during the trip.