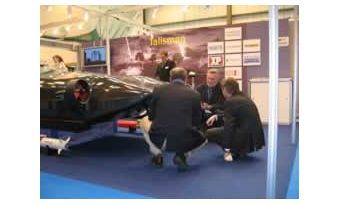 Fully-funded by BAE Systems private venture funding, the Talisman program was launched in late 2004, going from paper to initial trials within less than a year. The program is part of BAE Systems strategy to build up an integrated approach to unmanned vehicles and autonomous systems, leading to the development of Intelligent Autonomy which can be applied across all sectors. The program, developed and managed by BAE Systems at its Underwater Systems business in Waterlooville, U.K., pulls through expertise from various parts of the company, ensuring cost-effective design and manufacture.

Talisman comprises the vehicle and a remote control console. The vehicle is based on an innovatively-shaped carbon fiber composite hull, equipped with internal carbon fiber composite pressure vessels containing the electronics systems and payload. The hull is fitted with commercial-off-the-shelf vectorable thruster pods, which allow it to maneuver very accurately, hover and turn 360 within its own length. The hull has been designed and manufactured by stealth aircraft technology experts at the BAE Systems military aircraft sites at Warton and Samlesbury, UK.

Talisman has been designed with an open architecture system, which allows for rapid re-configuration of the mission system software. It pulls though proven technology from previous projects and couples it with advanced mission planning utilities. All mission parameters are pre-settable before launch, for full autonomous operation, with the possibility of operator intervention throughout the mission. Communications to and from the vehicle are via RF or Iridium SatCom (while the vehicle is surfaced) and via acoustic communications systems (when vehicle is underwater).

Talisman carries both integrated and variable payloads. As standard the vehicle is equipped with a suite of environmental sensors. Other payloads are mission or role specific and can include sonar systems and other UUVs such as Archerfish.

Talisman has already undergone a series of trial runs at sea, with a 100-per-cent success rate. Further trials are planned later this year, aimed at widening the range of payloads and systems which are integrated into the vehicle.

Andy Williams, managing director of BAE Systems Underwater Systems, said: “Our aim with Talisman has been to develop a concept demonstrator which will allow us display our capabilities to the world and to show our long term aspirations in this marketplace. We are using Talisman to widen the concept of operations and the concept of use of UUVs in the underwater battlespace and to prove the whole concept of a network-centered UUV.