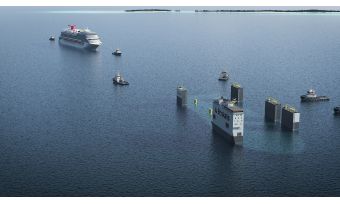 A huge Boskalis ship has come to the rescue of one of the largest cruise ships in the world by lifting it out of the water. Royal Boskalis Westminster N.V. won a contract from Carnival Cruise Line to load the Carnival Vista cruise ship onto the BOKA Vanguard and transport it to a shipyard where the dry dock work will take place. This operation - a world first - will be carried out in Freeport in the Bahamas in the coming weeks.

With room for nearly 4,000 passengers and a length of over 300 metres, the Carnival Vista is the second largest cruise ship in the Carnival fleet. Due to technical problems with the azipods, the ship's propulsion, it needs to be repaired in a dry dock that is currently unavailable in the region. With the use of the BOKA Vanguard, the largest semi-submersible heavy cargo ship in the world, Boskalis offers a solution to make this dry dock repair possible.

As the largest semi-submersible ship in the world, the BOKA Vanguard is uniquely positioned for the dry and safe transport of very heavy loads. The ship has an impressive track record of transporting large offshore oil and gas platforms, but can also transport other vessels and be used as an offshore dry dock facility.

An open and flat stern and a deck without a bow, so that it is able to transport loads that are longer and wider than the deck area of ​​275 by 70 metres, make the BOKA Vanguard unique. When the ballast tanks are filled, the deck of the ship sinks in a controlled manner to below water level, so that loads with a large draft can be loaded. This creates an alternative dry dock with which inspections and repairs can be carried out safely and efficiently at locations where no traditional dry dock facilities are available.

Click here to view an animation of the entire dry dock operation. Updates of the operation can be found at www.boskalis.com/vista.