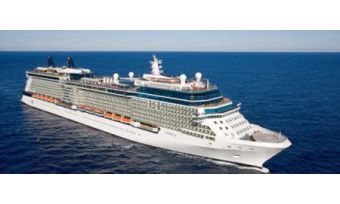 Ships to be equipped with the systems are Carnival Cruise Lines' Carnival Magic being built at Fincantieri's Monfalcone shipyard in Italy, and Celebrity Cruises' Celebrity Silhouette (image) under construction by Meyer Werft in Germany. The other two systems will be installed aboard Costa Cruises' Costa Fascionosa and Costa Favolosa, both of which are being completed by Fincantieri at its Breda shipyard. In addition to the navigation systems, all four ships will be similarly outfitted with integrated automation assemblies for machinery control developed by SAM Electronics' associate company, Valmarine AS of Norway.

Incorporating high degrees of operational redundancy and featuring integrating interswitchable SAM X- and S-band radars with ECDIS, autopilot and other key navaids, the NACOS systems will enable each cruise ship to be steered to an accuracy within half its beam using precise positioning and speed measurement techniques. The systems form part of a new extended series of NACOS Platinum models providing a wide range of scalable navigation, automation and control functions using common components and operating networks. Two such assemblies have already been commissioned for new 71,000-gt Aida cruise ships being built by Meyer Werft.

The NACOS 65-5 configurations are identical to the one installed on Cunard's newest 92,400-gt Fincantieri-built liner, Queen Elizabeth, which was officially named by HM The Queen in Southampton, UK, on 11th October. The 960-metre-long vessel began her maiden voyage to the Canary Islands the following day.