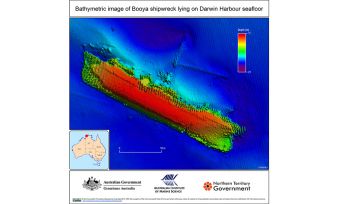 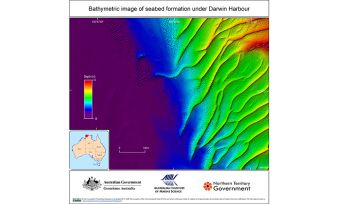 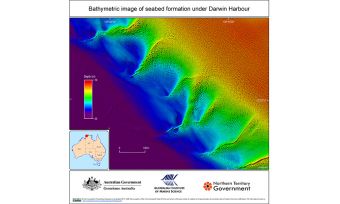 Darwin, Australia, is world-renowned for its rich and diverse landscapes. However, as a scientific exploration party has just found out, there is an equally diverse and previously undiscovered region of Darwin under the sea. A marine survey tasked with mapping the seabed of Darwin Harbour in high resolution and collecting geochemical and physical samples has found relics of Australia's ancient geography in the form of sub-marine sand dunes, ripples, sand waves and even shipwrecks.

These features tell a story from the last Ice Age some 20,000 years ago when global sea levels were much lower and Darwin Harbour as we know it today did not exist. During this time a land bridge existed between northern Australia and New Guinea. Darwin was potentially only a river valley until an estuary developed when rising seas drowned the area around 7,000-8,000 years ago.

Geoscience Australia was asked to partner with the Northern Territory Government in this research bringing over 50 years' experience in sea floor mapping which has underpinned exponential growth in building Australia's understanding of the marine environment. They will continue to collaborate on this research for the duration of the four-year programme.

The survey has also provided a new generation of accurate and detailed imagery of historic shipwrecks in Darwin Harbour. These include the USAT Meigs (sunk during the bombing of Darwin in 1942) and the Booya (image) which sank during Cyclone Tracy in 1974.

Armed with an increased understanding of the marine environment, the Northern Territory Government will be able to make the most informed decisions in terms of the ongoing management and development of the Harbour. The survey was undertaken by the Northern Territory Government in conjunction with Geoscience Australia and the Australian Institute of Marine Science, and is supported by funding from Ichthys LNG Project.