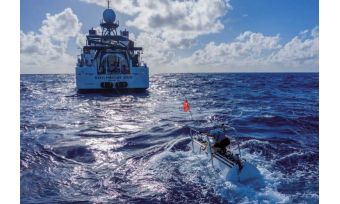 As extreme explorer Victor Vescovo continues his round-the-world expedition to become the first person to descend to the five deepest points in the Earth’s five oceans using the custom-built deep submergence vehicle 'Limiting Factor', it prompts the question: ‘Do we know as much about the deepest places on our planet as we thought?’

The best global maps of the oceans have a resolution of 30 arc-second grid cells (926m at the equator). Approximately 82% of the grid cells do not include a single depth measurement (Weatherall et al., 2015), and the percentage of the seafloor that has been directly measured by echo sounders is likely to be less than 18% (Mayer et al., 2018).

The recently launched Five Deeps Expedition is a round-the-world trip on a dedicated research vessel equipped with a full-ocean-depth manned submersible and supporting landers. The aim is to send Victor Vescovo, the architect of the expedition, to the deepest point in each of the five oceans within one year.

The primary mission is for Vescovo to dive alone to the deepest point in the Arctic, Atlantic, Pacific, Indian and Southern oceans. The expedition centres around the deep submergence support vessel (DSSV) Pressure Drop which is fitted with a state-of-the-art Kongsberg EM124 multibeam echosounder system, the newly designed and constructed two-person deep submergence vehicle (DSV) Limiting Factor and three full-ocean-depth lander systems to complement the scientific outputs of each dive and to act as sub-navigation points at depth.

Although exploring the five deeps is the primary mission, the expedition has a broader remit with a comprehensive science component including a collaboration with the Seabed 2030 initiative. Seabed 2030 is a collaborative project between the Nippon Foundation and General Bathymetric Chart of the Oceans (GEBCO) that will bring together all available bathymetric data to produce the definitive map of the world’s ocean floor by 2030.

Read more on the expedition in the May/June issue of Hydro International (both in print and online) and subscribe to our weekly newsletter to get regular updates on the Five Deep Expedition.