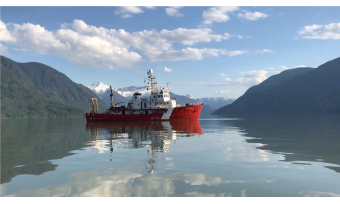 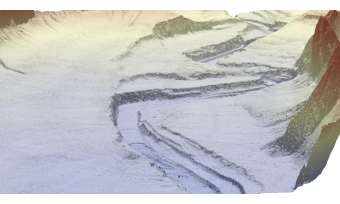 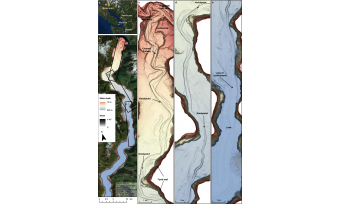 New research led by the National Oceanography Centre (NOC) has discovered how fast-moving waterfalls under the sea control the shape and behaviour of submarine channels. These underwater channels are the offshore equivalents of rivers, but can be much larger.

Submarine channels can extend for tens to thousands of kilometres offshore, providing an important conduit for the transfer of sediment, nutrients and pollutants, such as microplastics, to the deep sea. Avalanches of sediment that flow down these channels also pose a hazard to networks of seafloor cables that underpin global communications, including the internet.

An international research team, including NOC, the universities of Durham, Southampton and Hull (UK), the Geological Survey of Canada, and the University of New Hampshire (USA), performed the most detailed repeat mapping of any submarine channel to date. Time-lapse surveys acquired over nine years in Bute Inlet, British Columbia, revealed a dramatic series of up to 30 metre-tall steep cliffs (called ‘knickpoints’) that resemble waterfalls in rivers. Similar features migrate at a rate of less than 1 metre per year in rivers. The team observed much faster migration rates in the submarine channel – up to 450 metres per year.

The Evolution of Submarine Channels

NOC researcher Maarten Heijnen, the lead author of the new study in the journal Nature Communications, said: “We previously knew that knickpoints existed in submarine channels, but had no idea they could move so fast. The rate at which they migrate is hundreds of times faster than similar features move in rivers. It surprised us that such large features can be so dynamic and it is a stark reminder that there is still much to discover in the deep sea”.

“Our study of deep-sea environments such as submarine channels has been hampered by a lack of long-term monitoring” says Dr Mike Clare, also of NOC. “This study, and other exciting technological advances, are providing important and much-needed step-changes into understanding how these globally-important systems behave.”

Almost three quarters of the erosion in the channel resulted from these fast-moving knickpoints, leading the study’s authors to conclude that knickpoints are far more important for the evolution of submarine channels than other previously-suggested controls, such as the growth of meander bends. An abundance of repeated aerial photographs and satellite data has revealed how rivers change over time; however, the challenges of surveying deep underwater means that such a wealth of time-lapse surveying does not exist for submarine channels. Instead, most of our understanding has been based on scaled-down laboratory models or on one-off seafloor surveys that only capture a snapshot in time.

Dr Matthieu Cartigny from Durham University commented: “We think that knickpoints play an important role in many other submarine channels around the world. Understanding how these fast-moving features behave is important for determining how and where all sorts of particles, including sediment, organic carbon and microplastics, are transported.”

The powerful sediment avalanches that transit these submarine canyons also pose a threat to critical seafloor infrastructure, such as the network of telecommunication cables that carry over 99% of all digital data traffic, including the internet. Dr Gwyn Lintern of the Geological Survey of Canada added: “These findings contribute valuable information for designing resilient seafloor structures that provide the communication and power supplies that underpin our daily lives. The Geological Survey of Canada supports this important work under our Public Safety Geoscience Program. In 1929, an earthquake off the east coast of Canada triggered submarine flows that severed 12 transatlantic cables. Submarine landslides and sediment flows are also a common coastal hazard in Canada’s inlets. The deposits of such flows are often used for dating major earthquake and land flood events, and therefore understanding how the channels transport these flows is a very important piece of information.” 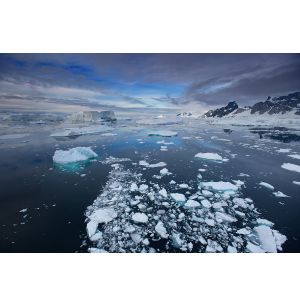 How the Seafloor of the Antarctic Ocean is Changing 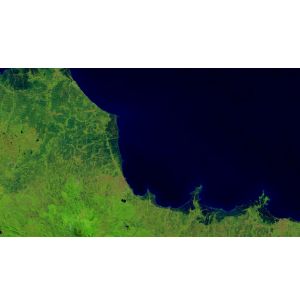