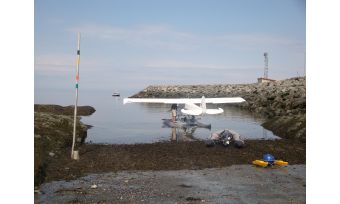 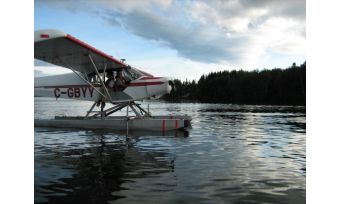 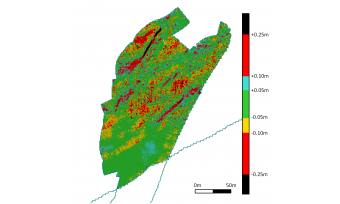 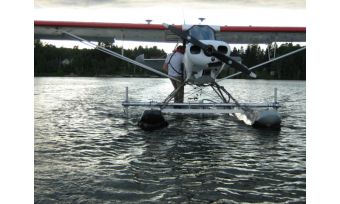 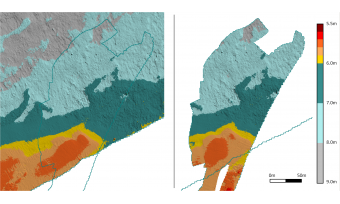 Remote, difficult to access: it just depends on the point of view. Often, trying to reach some areas with a classical survey vessel or with an opportunity launch is like banging our heads against a brick wall, but it appears to be quite easy to land there with a seaplane. That is the premise for the Seaplane Bathymetric Platform Project, which aims to integrate bathymetric survey instruments into an existing seaplane to conduct hydrographic surveys in remote and difficult-to-access survey areas.

Maritime navigation development in Canada’s Northern Waters is highly impacted by the lack of nautical charts meeting minimum standards for modern navigation. Indeed, less than 10% of the Canadian Arctic waters have been charted to modern standards, and about 35% of the main Arctic shipping routes have been surveyed and charted to these standards. This situation is mainly due to extreme prevailing environmental conditions in the Arctic, the remoteness and the huge size of the Canadian Arctic Archipelago.

Shipping traffic is increasing in the Arctic, essentially due to climate change, which opens navigation routes for commercial cargo and passenger ships. Without reliable nautical charts, the risk associated with commercial shipping will increase with traffic development and intensity.

The main limitation to massive hydrographic data production in the Arctic remains its underlying cost. Alternative solutions, like satellite bathymetry and airborne Lidar, are limited to very shallow and low turbidity waters, and hydrographic data crowdsourcing is a concept which still remains to be proven in terms of data quality and reliability. Arctic survey missions face problems of running costs and time frames for vessel deployment, due to the huge size of Canada’s Northern Waters.
An alternative to classical survey vessels deployment may be found in operating hydrographic instruments from a seaplane, with advantages such as:
• Fast deployment in remote and not accessible areas;
• Possibility of fast reconnaissance surveys, before high density survey planning;
• Much lower deployment and mobilisation costs than hydrographic survey vessels;
• Running cost similar to those of a small survey launch.
In this context, Transport Canada has granted CIDCO and Geosphair Aviation Inc. to evaluate the feasibility of using a seaplane as a hydrographic platform. The goal of the project is to prove that a seaplane could be a survey platform well suited to carry out Multibeam Echo Sounder (MBES) surveys at the International Hydrographic Organization (IHO) special order level.

The main steps of the project included:
1 the modification to the airframe, floats and electrical system to accommodate the bathymetric survey instruments and auxiliary motors;
2 the installation, calibration and configuration of the complete hydrographic survey system;
3 the execution of two hydrographic surveys;
4 the data processing;
5 the quality control and the assessment of the datasets collected with respect to the IHO standards.

The proof of concept was made using Geosphair Aviation Inc.’s Super-Cub seaplane registered C-GBYY. The plane was specially modified for hydrographic surveys purposes. C-GBYY is operated in Canada under a Special Airworthiness Certificate – Experimental. Under this kind of certificate, aircraft modifications and maintenance are approved by the owner. The system deployed is composed of a pole-mounted Teledyne RESON T20-P MBES and a CodaOctopus F180 position and orientation unit. The F180 is divided into an inertial and motion unit (IMU) strapped inside the cabin and two GPS antennas bolted on the wings (Figure 1).

The lever arms and the mounting angles between the different sensors have been accurately measured by a dimensional control survey of the seaplane done with a total station. A patch-test calibration was conducted on the Eel Lake to calculate the residual angular offsets between the MBES and the IMU (Figure 2).

The seaplane then took off from the Eel Lake and landed a few miles away on the St-Lawrence River, in front of the Canadian Hydrographic Service (CHS) offices, in order to perform a sea trial (Figure 4).

The sea trial consisted of survey lines sailed in parallel with the CIDCO’s survey launch F.-J. Saucier. The F.-J. Saucier is a Cheetah Marine Catamaran equipped with a Hydropod mounted Teledyne RESON SeaBat 7125-SV2 MBES and an Applanix PosMV320 position and orientation unit. Each of the two hydrographic platforms produced a bathymetric surface
at 50cm resolution (Figure 5).

The difference between the surface of reference (F.-J. Saucier) and the surface to be evaluated (Seaplane Bathymetric Platform) made it possible to qualify the horizontal and vertical accuracy of the data collected by the Seaplane Bathymetric Platform. The difference surface (Figure 5) shows a standard deviation of 14cm at 95%. Even if the overall performance can be considered as good, it could have been easily improved with RTK or PPK positioning. Indeed, the sea trial was conducted in stand-alone positioning mode, which results in a horizontal positioning uncertainty of about 1.5m. The impact is low in flat areas (see south part of the surveyed zone) but increases in rocky spots which forgive no positioning approximation.

A QC report was also conducted to evaluate the vertical uncertainty of the hydrographic survey system T20-P/F180. It showed that the system qualifies for the IHO special order.

The project results proved that the Seaplane Bathymetric Platform is capable of:
• Take-off from its base with a MBES&IMU installed;
• Land at sea in 0.75m of short waves;
• Perform a sea trial at IHO special order;
• Take-off at sea and go back to base.

In demonstrating that the data quality of the Seaplane Bathymetric Platform is comparable with the one obtained from a classical survey launch, the project contributed to developing tools and knowledge to facilitate survey operations in remote areas such as Canada’s Northern Waters.

Nevertheless, the Super-Cub is currently not capable of carrying sufficient battery payload. An optimisation programme to reduce weight and parasite drag to the system is underway.

In a second phase, this project could therefore contribute to developing Canada’s capacity for the production of reliable hydrographic data in Northern waters, making it possible to map waterways with high navigation risks due to the lack of modern hydrographic data, or to conduct surveys for new ports implantation .

The Seaplane Bathymetric Platform Project was granted by Transport Canada’s Northern Transportation Adaptation Initiative. Teledyne RESON contributed with the loan of a T20-P MBES and Caris with the loan of one HIPS and SIPS licence.