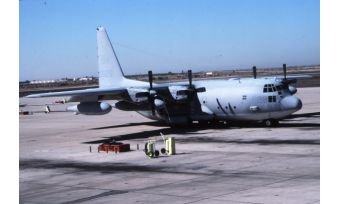 Fausto Bravo is a lieutenant in the Chilean Navy, specifically in the Hydrographic and Oceanographic Service and he would like some advice. "In December 2019, one of Chile's air force planes crashed in the Drake Sea and since then our government has been trying to bring relief to the families of the victims by trying to find clues or parts of the aeroplane on the ocean floor," he writes.

"The problem that we have had is that our most modern multibeam sonar is a Kongsberg EM 122 that has beams that deploy with 1-degree aperture, but the depth of the sea in which the search is taking place is about 4,000 metres. This does not allow us to see or distinguish any feature that could be related to any part of the aeroplane," Fausto adds.

The C-130 Hercules with 38 people on board took off at 4.55 pm (1955 GMT) on Monday 9 December from Punta Arenas in the south of Chile and was heading to a base in Antarctica, but operators lost contact with the plane just over an hour later. The region in which the aircraft disappeared is a vast ocean wilderness of ice sheets off the edge of South America.

Finding Parts of the Crashed Aeroplane

Because of the problems they have to solve, he is asking for advice or recommendations on which systems, ships or equipment or new technologies he and his colleagues could look for so that they could have a better chance of mapping and finding parts of the aeroplane when mapping the sea floor at depths of about 4,000 metres in the search area in the Drake Passage. If you could help Fausto or if you have any advice for him and his service, please let us know. You can send an email to Cees van Dijk, content manager and we'll forward your messages to Lieutenant Fausto.

About the Hydrographic and Oceanographic Service of the Chilean Navy

SHOA or Servicio Hidrográfico y Oceanográfico de la Armada de Chile (Spanish for Hydrographic and Oceanographic Service of the Chilean Navy) is an agency of the Chilean Navy that manages situations dealing with hydrography and oceanography, including tides and tsunamis. It is also the responsibility of SHOA to contribute through research to the development and promotion of other related national and international activities of interest to the country.

The primary mission of the Hydrographic and Oceanographic Service of the Chilean Navy is to provide technical elements, information and technical assistance for navigational safety in fluvial and lacustrine areas, internal waters, territorial waters, and in the high seas adjacent to the Chilean littoral.

Likewise, it represents the official, technical and permanent service of the state with regard to all that has to do with hydrography: maritime, fluvial and lacustrine hydrographic survey, nautical cartography, the production and publication of navigational charts of national waters, oceanography, the planning and coordination of all national oceanographic activities related to physical-chemical research, tides, currents and tidal waves, nautical geography, navigation, astronomy, the official time signal and aero-photogrammetry applied to nautical charts.