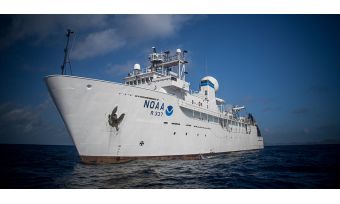 In November, President Trump declared the United States would 'act boldly' on a gigantic task: mapping a chunk of the ocean floor that's larger than the combined land area of all 50 US states. Armed with this strong backing from the White House, the National Oceanic and Atmospheric Administration (NOAA) is ready to go where no man has gone before. The agency this year plans to accelerate exploration of the entire US Exclusive Economic Zone (EEZ), with the goal of completing the job by 2030, E&E News, a news organization focusing on energy and the environment, reports. An official described the exploration project as challenging, but the work is already underway, with roughly 40% of the EEZ mapped in recent years. The whole zone covers more than 13,000 miles of coastline and 3.4 million square nautical miles of ocean.

NOAA officials say they're following in the footsteps of Lewis and Clark and the nation's pioneering astronauts. The Lewis and Clark Expedition, from May 1804 to September 1806, also known as the Corps of Discovery Expedition, was the first American expedition to cross the western portion of the United States. It began in Pittsburgh, Pennsylvania, made its way westward, and passed through the Continental Divide of the Americas to reach the Pacific coast. The Corps of Discovery was a selected group of US Army volunteers under the command of Captain Meriwether Lewis and his close friend Second Lieutenant William Clark.

President Thomas Jefferson commissioned the expedition shortly after the Louisiana Purchase in 1803 to explore and to map the newly acquired territory, to find a practical route across the western half of the continent, and to establish an American presence in this territory before Britain and other European powers tried to claim it. The campaign's secondary objectives were scientific and economic: to study the area's plants, animal life, and geography, and to establish trade with local American Indian tribes. The expedition returned to St. Louis to report its findings to Jefferson, with maps, sketches, and journals in hand (source Wikipedia).

NOAA Deputy Administrator Timothy Gallaudet figures there's no reason why ocean exploration can't do for his organization what space exploration did for NASA a half-century ago. "Every time I'm on the Mall I will see a kid in a NASA shirt," Gallaudet said. "I wanna see a kid with a NOAA shirt, and maybe with an ROV and an AUV on it."