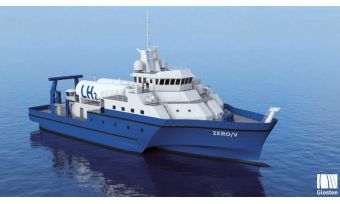 Marine research and hydrographic activities could soon be possible without the risk of polluting either the air or the ocean thanks to a zero-emissions ship design and feasibility study led by Sandia National Laboratories. Hydrogen fuel cells have existed for decades, and there are multiple advantages to using them instead of diesel engines to power research ships. For example, with zero-emissions technology, fuel cells will not contaminate air or water samples collected in sensitive ecological areas. Additionally, they make almost no noise, so they will not upset marine life or interfere with the many sensors scientists use to listen to the sound in the ocean.

Despite these and many other advantages, the feasibility of a hydrogen-powered research vessel has never been studied or proven. A report released recently by Sandia National Laboratories shows it is technically and economically feasible to build such a vessel in a manner consistent with marine regulations. The project team nicknamed the vessel ‘Zero-V’, short for a zero-emissions research vessel.

The Sandia-led Zero-V project brought together the Scripps Institution of Oceanography at the University of California San Diego, the naval architecture firm Glosten and DNV GL, and a global quality assurance and risk management company working for the maritime industry. It was funded by the US Department of Transportation’s Maritime Administration.

One of the biggest additional benefits of using hydrogen to power a boat is the absence of ecologically damaging fuel spills. According to Lennie Klebanoff, a Sandia chemist and project lead, it is impossible to have a polluting hydrogen spill on the water. More buoyant than helium, hydrogen rises on its own and eventually escapes into outer space. “If you’re working in a sensitive ecological area and you spill liquid hydrogen there, the fuel not only removes itself from this environment, it removes itself from the planet,” said Klebanoff.

In fact, the water generated by fuel cells is so pure that the ship’s crew can drink it, with conditioning, or use it for scientific experiments. This reduces the need to desalinate seawater, which currently consumes large amounts of energy. Moreover, fuel cells are electrical devices and actually offer a faster power response than internal combustion engines.

Read more in the May/June issue of Hydro International that will be published shortly (both in print and online at www.hydro-international.com).