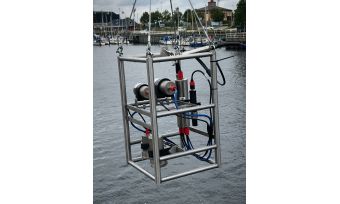 As the world steps up environmental awareness, the RV Polarstern is preparing for a year-long stay in the Arctic ice drift, and MacArtney Germany is playing a small part. The company has recently designed and delivered an underwater ice camera system for the research vessel, the Polarstern, a German icebreaker embarking on a global climate mission to investigate and research previously inaccessible regions during an Arctic winter. The MOSAiC International Arctic Drift Expedition, led by the German-based Alfred Wegener Institute, Helmholtz Centre for Polar and Marine Research, will collect vital data on climate change over the course of the year.

With a total of 600 scientists from 19 nations taking part over the course of a year, the expedition will complete research above and beneath the Arctic ice shield to better understand how changes in the Arctic impact global climate change.

The hybrid cable, manufactured to resist air temperatures as low as minus 45 degrees, along with the rugged design and reliable performance of the TrustLink stress termination, ensures safe power supply between the surface and the frozen depths — all deployed by the MacArtney CORMAC B manual drive winch.

In the September/October issue, there is a featured article on the MOSAiC expedition.