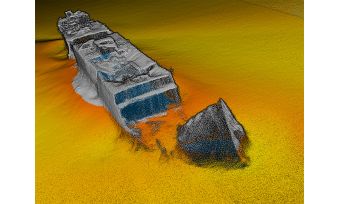 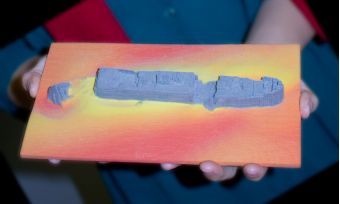 Originally constructed in the North East of England in 1888, the SS Polwell was used by German forces at the start of World War I. However, early on in the war, the vessel was captured off Gibraltar by the British Admiralty and requisitioned into service as a defensively armed merchant ship. The SS Polwell was torpedoed off the Irish coast by a German submarine in 1918. Now, after resting on the seabed for almost a century, details of this historic shipwreck have been revealed using the latest multibeam sonar technology and CARIS HIPS and SIPS software.

On 5 June 1918, the SS Polwell was on route to France with a cargo of coal. As it left the Irish Coast, a warning shot by a German submarine was fired across its bow, encouraging the crew of thirty to abandon ship by lifeboat. The U-96 then fired a single torpedo at the Polwell, hitting it amidships and sinking it. All crew landed safely an hour later on shore. However the Polwell immediately sank, its final resting place approximately six miles east of the North Dublin Coast.

After resting on the seabed for almost a century, details of this historic shipwreck have been revealed using the latest multibeam sonar technology and CARIS HIPS and SIPS software. Through an expedition to investigate historic wrecks, the Marine Institute Galway, through the INFOMAR programme and in conjunction with Ulster University, collected a stunningly detailed point cloud survey of the SS Polwell's wreck. The dataset revealed that the ship measures 92 metres in length and although broken into three sections, it is remarkably still intact considering its age.

The captivating image and dataset of the SS Polwell was submitted to CARIS on behalf of the Marine Institute Galway by Hydrographic team leader Fabio Sacchetti who was voted the overall winner of the annual CARIS Calendar Contest. The prize for winning was a 3D printed scale model of the SS Polwell wreck dataset.