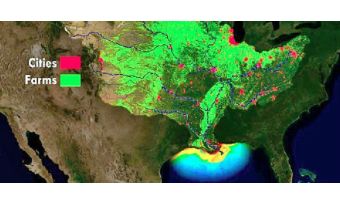 NOAA scientists are forecasting this summer’s Gulf of Mexico hypoxic zone or ‘dead zone’ – an area of low to no oxygen that can kill fish and other marine life – to be approximately 7,829 square miles or roughly the size of Massachusetts. The annual prediction is based on U.S. Geological Survey river flow and nutrient data. The 2019 forecast is close to the record size of 8,776 square miles set in 2017 and larger than the 5-year average measured size of 5,770 square miles, NOAA stated on its website www.noaa.gov.

The annually recurring Gulf of Mexico hypoxic zone is primarily caused by excess nutrient pollution from human activities, such as urbanization and agriculture, occurring throughout the Mississippi River watershed. Once the excess nutrients reach the Gulf, they stimulate an overgrowth of algae, which eventually die, then sink and decompose in the water. The resulting low oxygen levels near the bottom are insufficient to support most marine life and have long-term impacts on living marine resources that are unable to leave the area. Considered one of the world’s largest, the Gulf of Mexico dead zone occurs every summer.