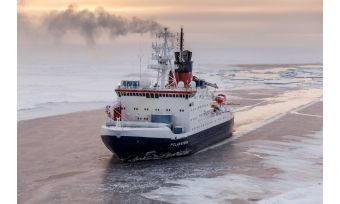 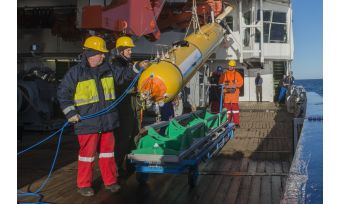 On the evening of 10 August 2019, the German research vessel Polarstern left her homeport in Bremerhaven, Germany and set course for the Arctic. The purpose of the expedition is to conduct studies at a major long-term monitoring station, the AWI’s Hausgarten observatory in the Fram Strait. Experts from various disciplines are investigating all aspects of the ecosystem, from the water’s surface to the ocean depths, in order to determine the impacts of climate change on biodiversity in the Arctic. After roughly a month underway, Polarstern will reach the Norwegian port of Tromsø in mid-September, where she’ll receive her final preparations for the year-long MOSAiC expedition, prior to leaving for the Central Arctic on 20 September.

Organisms living in the dark ocean depths rely on the sun-filled surface for food, where phytoplankton can grow. In this regard, there are major fluctuations between warm and cold years. Accordingly, an interdisciplinary team of researchers under chief scientist Dr Katja Metfies from the Alfred Wegener Institute, Helmholtz Centre for Polar and Marine Research (AWI), will investigate the marine ecosystem in the survey area comprehensively; from the atmosphere to the water column, to the ocean floor.

In the context of long-term research conducted at the AWI’s Hausgarten observatory, located between Svalbard and Greenland, the marginal ice zone has proven to be especially productive. The researchers surmise that the high biological productivity here is the result of physical and chemical processes in the upper water column, as well as exchanges with the atmosphere. To examine the connections between physics, chemistry and ecology in the front systems of the marginal ice zone in detail, they use an autonomous underwater vehicle (AUV) named Paul, which can record not only fundamental physical parameters (temperature, salinity, depth) but also various types of ecological data. These include chlorophyll a as an indicator of photosynthesis, but the AUV also records organic substances and nutrients like nitrate during its dives.

Map the Seafloor in High Resolution

Now Paul is scheduled to dive to the ocean floor – in previous expeditions, it remained in the upper water layers. Equipped with a camera and side-scan sonar, its task is to map the seafloor in high resolution. In this regard, its sonar will expand the spatial coverage offered by the AWI’s towed camera system OFOS, because it can scan farther from side to side, instead of simply ‘looking’ straight down. At depths of up to 2,600 metres, Paul will hover five metres above the seafloor, recording its characteristics at a resolution of approximately 10 to 15 centimetres. These maps will then provide the basis for determining the sample collection sites for the ‘multicorer’, a device that extracts samples from the sediment for microbiological testing.

This sediment will pave the way for studies that supplement those conducted by the microbiologists all year round with the help of an autonomous tracked vehicle (‘crawler’). For the third time, the AWI’s crawler Tramper is now rounding off an entire year spent exploring the Arctic seafloor, where it regularly measures oxygen consumption, among other things, as an indicator of microbiological activity. During the current Polarstern expedition, the crawler will be retrieved and immediately prepared for its next mission. Tramper will be supported by a second crawler named Nomad, which was successfully tested at the deep-sea observatory in 2018. This time, the two robots will be equipped for a two-year operation, since Polarstern won’t be available for an expedition to the Hausgarten next year.

As Much Valuable Data as Possible

In the context of MOSAiC, experts from 19 countries will investigate the Arctic for an entire year, including the barely researched winter. To make this possible, the Polarstern will drift through the Arctic Ocean from autumn 2019 to autumn 2020, trapped in the ice. MOSAiC will be coordinated by the Alfred Wegener Institute, Helmholtz Centre for Polar and Marine Research (AWI). To ensure that this unparalleled project is a success and yields as much valuable data as possible, more than 70 institutes have pooled their resources in a research consortium. The expedition budget is approximately 140 million euros.