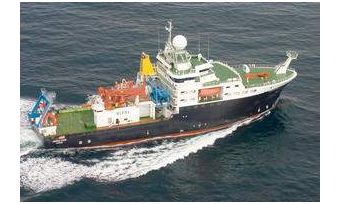 A voyage to find out what happens to seabed fauna in a deep-water trawling area if you leave it undisturbed several years got underway on 9th May 2011. The RRS James Cook set sail from Glasgow, Scotland (UK) in the direction of Rockall Trough, Rockall Bank and Hatton Basin, .

The deep-water banks and basins to the northwest of the UK are rich habitats for a variety of benthic species, including sponge reefs, cold-water coral mounds and sediment communities. At the same time, those areas form important fishing grounds for an international fishing fleet, including bottom fisheries such as deep-sea trawling.

In order to design a sustainable and ecosystem-based management scheme for these offshore areas, it is necessary to compile all possible information about their different habitats and communities. This includes benthic community structure and extent, fishing intensity and spatial occurrence, as well as the effectiveness of conservation measures.

On board the RRS James Cook are 29 scientists and technicians from five different institutes, including the National Oceanography Centre (NOC). The expedition has three main aims. First, it will investigate the physical environment and animal communities of different benthic habitats. Second, it will identify the extent of human impacts on those habitats, especially from deep-sea trawling activities. Finally, it will assess the effect of protection measures in the area.

The scientists will use a range of sampling and surveying equipment, including three underwater vehicles: the Autosub6000 autonomous underwater vehicle, a Lynx remotely operated vehicle and the remotely operated tethered vehicle Hybis. They will also use corers to sample the benthic fauna and sediments, and a conductivity, temperature and density (CTD) instrument to study water column.

Their first target is the Darwin Mounds in the Northern Rockall Trough. These are small cold-water coral reefs, about 5 metres high and 75 metres across, at a water depth of about 1,000 metres. They were discovered by NOC scientists in 1998. Further surveys two years later revealed that many mounds were affected by deep-sea trawling, and the region became protected in August 2003.