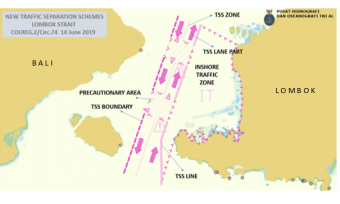 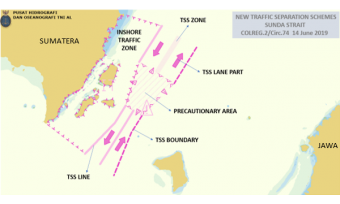 The Indonesian Hydrography Office (Pushidrosal) conducted large hydrographic surveys between 2016 and 2017 to obtain full coverage of bathymetry and other required hydro-oceanographic data of the Sunda Strait and the Lombok Strait. The survey used modern methods and equipment from KRI RIGEL - 933 and KRI SPICA - 934, not only for study material and design exercises for the new Traffic Separation Schemes (TSS), but also to provide a high level of trust for international navigation in both straits.

New TSS and other routing measures in the Sunda Strait and the Lombok Strait, all in accordance with the United Nation Convention on the Law of the Sea (UNCLOS) 1982 and adopted by IMO, will come into force on 1 July 2020. The establishment of TSS on the Sunda Strait and the Lombok Strait will improve the safety of navigation through it, while also protecting the marine environment. While there are nine global choke points in international shipping lanes, Sunda Strait and Lombok Strait are part of four choke points located in Indonesia. In addition, the existence of TSS will facilitate monitoring of traffic that passes through “two of the nine important choke-points” in the world, so that traffic management can be more easily implemented.

A 100% coverage hydrographic survey was carried out to enhance the category zone of confidence (CATZOC) and to support the establishment of the new TSS. Pushidrosal also prepared an information paper concerning the datum reference status and the provision of modern nautical charts covering Indonesian archipelagic sea lanes.

Pushidrosal also conducted an additional hydrographic survey at Anak Krakatoa after the tsunami incident in 2018 to assess any depth changes which would affect the safety of navigation in the vicinity of the TSS and archipelagic sea lane. However, so far there is no evidence of depth changes around the shipping route in the Sunda Strait, especially in the TSS and archipelagic sea lane. The distance between the TSS and Anak Krakatoa is about 40km, and hydrographic survey results show that depth changes are only seen up to 2km from the shore near Anak Krakatoa, caused by partial collapse due to the volcanic eruption. Furthermore, the hydrographic data archive from many decades indicates that there are no significant depth differences that are critical for navigation safety.

The IMO-adopted TSS that will come into force on 1 July 2020 serves as a guide to help ships navigate safely by providing clear navigation courses that prevent the ship from approaching the shallow water. The separation line between the two routes is expected to prevent collisions between ships coming from one direction from Merak to Bakaheuni at Sunda Strait and the other direction from Pandangbay to Lembar at Lombok Strait. A collision in the intersection area of the route is prevented with the existence of Precautionary Areas, which raise awareness among ship's captains, therefore minimizing the risk of collision.