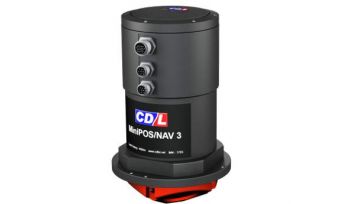 An affordable and functional solution for Mid-water Station Keeping (MWSK) has been on the wish list of most ROV operators and manufacturers for some time now; the huge benefits in terms of operational efficiency and the future potential for pre-planned automated missions has made it a case of when, not if.

Against this backdrop and at the request of C-Innovation,CDL and Schilling Robotics engineers started work on a collaborative solutionover twelve months ago, the results of that effort were demonstrated in Marchin the Gulf of Mexico following an extensive period of Factory Acceptance Tests.

The solution centres around fusing these readily availablepositioning technologies (INS, USBL and DVL) and the integration of thosetechnologies with Schilling’s next generation closed loop control system. Atthe heart of the solution is the CDL MiniPOS3 INS (Inertial NavigationSystem)platform which uses the USBL position (and DVL when available) toproduce a highly stable INS aided solution feeding precise position,acceleration and rotation information directly to the control system on the ROV at update rates of up to 50Hz.

During the trials carried out in March 2011 on the ChouestHoliday, a C-Innovation performed an extensive set of test procedures with aUHD ROV system to demonstrate the world’s first practical ROV MWSK systemutilizing inertial technology aided by a surface based USBL positioning system.MiniPOS3 is hardware independent and can work with any USBL or LBL system and avariety of topside software packages.  The first software package to fullysupport the functionality is WinFrog by Fugro Pelagos which was used duringtesting.

Theperformance of the MiniPOS3 and the Schilling control system can be seen in thescreenshot opposite and the results are remarkable. The absolute positioningaccuracy of the ROV (without DVL) was noted at a standard deviation of lessthan 40cm during MWSK. With DVL lock this improved toapproximately 3cm.