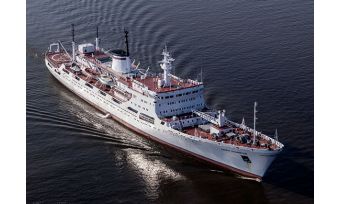 The Russian navy's oceanographic research vessel Admiral Vladimirsky has arrived in the Antarctic sea as part of a circumnavigation and will start to identify the exact location of the South Magnetic Pole, according to the Russian press agency TASS. Navy spokesman Captain 1st Rank Igor Dygalo said: "The vessel has arrived in the D’Urville Sea, which washes into the Antarctic, to carry out oceanographic research with the aim of identifying the location of the South Magnetic Pole’s point."

The Admiral Vladimirsky was built in Szczecin (Poland) in 1975. The vessel is operational in Russia’s Baltic Fleet. It displaces 9,120 tonnes, has an operating range of 18,000 miles and a crew of 170 men.

Discovery of the Antarctic

The oceanographic research vessel has now covered a distance of about 27,000 nautical miles along the route of Russia’s circumnavigation voyage devoted to the 200th anniversary of the discovery of the Antarctic by Russian explorers and the 250th anniversary of the birth of admiral and explorer Ivan Kruzenshtern. The expedition started in December 2019 and will end in June this year.

The D’Urville Sea is a marginal sea of the Pacific sector of the Southern Ocean, which washes Adelie Land in East Antarctica. The southern part of the sea lies within the mainland shoal and is less than 500 metres deep, while its northern portion has a depth of up to 3,610 metres. The sea is covered with drift ice for most of the year.

The hydrographic ship Marshal Gelovani and the oceanographic research ship Yantar are also taking part in the round-the-world expedition along different routes.