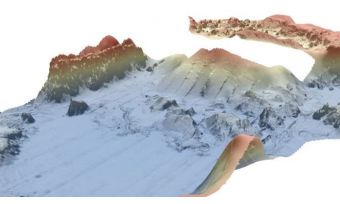 An international team of scientists has mapped huge blocks on the seabed from the recent eruption of the Anak Krakatau volcano, Fox News reports. The Indonesian island volcano erupted in December 2018. The eruption caused part of the island in the Sunda Strait to collapse into the sea, triggering a tsunami that killed at least 430 people in Sumatra and Java. Located within the caldera of the devastating 1883 Krakatau volcano, Anak Krakatau’s collapse left massive chunks of rock lying on the seafloor, according to scientists. Earlier this year experts mapped the seabed using bathymetric technology, which analyzes underwater terrain.

Data on the 'landslide runout' was presented by Prof. David Tappin of the British Geological Survey at the recent Fall Meeting of the American Geophysical Union in San Francisco. James Hunt, PhD of the U.K.'s National Oceanography Centre was a co-principal investigator of the research.

From a major marine survey over the Krakatau caldera area carried out in July 2019, the scientists present new results on the eruption mechanisms of these two events in 1883 and 2018. The marine survey acquired seismic and multibeam bathymetry, together with sediment coring. They use this marine data set as a basis for tsunami numerical simulations of both events, according to an abstract.

The tsunami is initiated with the non-hydrostatic model NHWAVE, with propagation from the Boussinesq model FUNWAVE. The numerical modelling results of 2018 are presented in another contribution to this session. The simulations from 1883 are presented here; the first to be based on realistic eruption mechanisms from the marine survey. The simulation results are validated from the post-event surveys of Verbeek, existing tsunami sediment studies and new fieldwork in the area.

Of all the different tsunami mechanisms, those from volcanic eruptions are the least well understood. The greatest loss of life from any historic volcanic eruption-generated tsunami was in 1883 when the Krakatau volcano in Indonesia exploded. During this large-volume, caldera-forming event, multiple, volcanically-triggered tsunamis were generated which, on striking the adjacent coasts of Java and Sumatra, killed 33,000 people.

Despite numerous published papers on the relative contributions to the tsunami from these mechanisms, they are still not clearly identified or defined and have been a source of speculation and controversy for over 130 years. In December 2018, the ‘child’ Anak Krakatau, located within the 1883 caldera erupted and collapsed, with the resulting tsunami killing 437 people; the event reminding us of the almost unrecognised tsunami hazard from volcanoes. The 2018 tsunami was completely unexpected and, again, the tsunami mechanism remains uncertain and is, as yet, unexplored.