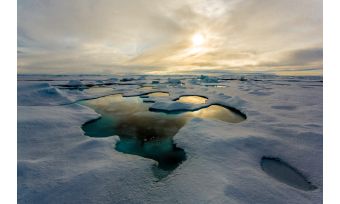 The sea-ice extent in the Arctic is nearing its annual minimum at the end of the melt season in September. Now, just approx. 3.9 million square kilometres of the Arctic Ocean are still covered by sea ice, according to researchers from the Alfred Wegener Institute and the University of Bremen. This is only the second time that the annual minimum has dropped below four million square kilometres since satellite measurements began in 1979. Until mid-August, it looked as though the all-time record would be reached: the area of the Arctic Ocean covered by ice (defined as the area with a sea-ice concentration of more than 15%) from late March to early August was the smallest ever measured by satellites.

Ice Was Unable to Recover

“Our satellite data shows that between March and April 2019, there was an unusually large decrease in the ice extent, from which the Arctic sea ice was unable to recover,” explained Professor Christian Haas, a geophysicist and head of the Sea Ice section at the Alfred Wegener Institute, Helmholtz Centre for Polar and Marine Research (AWI), and Dr Gunnar Spreen from the University of Bremen’s Institute for Environmental Physics. Since the second half of August, however, the seasonal reduction has slowed down, overlaid by short-term fluctuations. The lowest value so far for 2019 was 3.82 million square kilometres, observed on 3 September. This means that this year, the September average could be below 4 million square kilometres for only the second time.

Extremely Cold in the Arctic

In fact, the ice could retreat further in the coming weeks. Even though in early autumn air temperatures in the Arctic have now fallen below freezing, the heat stored in the water can continue to melt the underside of the ice for a few more weeks. However, if it becomes extremely cold in the Arctic in the days ahead, the ice cover could actually increase again. In October, the scientists will analyse the data for the whole of September, and will then be able to make a final assessment of the sea-ice minimum in 2019. It appears unlikely that this year we will see a new absolute record, below the sea-ice extent of 3.4 million square kilometres observed in 2012. “Record or not, this year confirms the continued long-term reduction of Arctic sea ice as a result of climate change, making it ever more likely that in a few decades' time the Arctic will be ice-free in summer. This will mean drastic changes in the Arctic, with consequences for the climate and ecosystems, as well as for people, including us in Europe,” says Christian Haas.

Scientists at the Alfred Wegener Institute and the Institute for Environmental Physics at the University of Bremen are together analysing the complete satellite data on the ice concentration, extent, and thickness, as well as atmospheric measurements. The website www.meereisportal.de/en, for example, publishes daily updated ice maps and provides detailed summaries of the sea-ice developments. Ice extent estimates from other institutions (e.g. NSIDC or OSI-SAF) can provide slightly different results. Currently, for 2019 they predict the third-lowest ice extent. “These slight differences are due to the higher resolution of our data and the slightly different methods used to calculate the ice concentration. They show the uncertainties that even the most modern satellite observations can have. Data from the MOSAiC expedition (www.mosaic-expedition.org) will help to reduce these uncertainties,” explains Dr Gunnar Spreen from the University of Bremen’s Institute for Environmental Physics.

Search for a Suitable Ice Floe

The researchers are currently particularly interested in the northern Laptev Sea: on 20 September, the research icebreaker Polarstern will set sail from Tromsø, in Norway, for the start of the MOSAiC expedition. In the northern Laptev Sea they will search for a suitable ice floe to moor the Polarstern to, in order to drift, icebound, through the Central Arctic for an entire year. “We’re following the ice situation very closely and have developed a series of new data products to offer the best-possible, detailed insights into the current conditions,” reports Christian Haas. “In the Laptev Sea, the ice situation is similar to previous years with an Arctic-wide low ice extent. This means that it will be relatively easy for us to reach our research area, at a latitude of 85 degrees north. But being so close to the ice edge will make it difficult to find a suitable ice floe that is large enough and thick enough to set up our ice camp. Our computer models show that the ice south of 88 degrees north is less than 80 centimetres thick, which is less than the 1.2 metres we’d ideally like to have to safely set up our measuring stations. We may have to travel farther north than planned to find the right conditions,” expects Christian Haas, who will lead the second leg of the MOSAiC expedition from mid-December.

About the MOSAiC expedition

The September/October issue of Hydro International (both in print and online) will feature an article on the MOSAiC expedition.