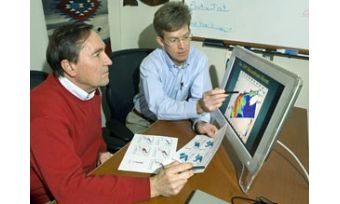 The end of April usually brings the first signs of harmful algae in USA's New England waters, and this year, researchers from the Woods Hole Oceanographic Institution (WHOI) and North Carolina State University (NC State) are preparing for a potentially big bloom.

A combination of abundant beds of algal seeds and excess winter precipitation have set the stage for a harmful algal bloom similar to the historic "red tide" of 2005, according to researchers from WHOI and NC State. The 2005 bloom shut down shellfish beds from the Bay of Fundy to Martha's Vineyard for several months and caused an estimated USD50 million in losses to the Massachusetts shellfish industry alone. The weather patterns over the next few weeks will determine whether this year's algal growth approaches the troubles of 2005.

The research team - led by WHOI senior scientists Don Anderson and Dennis McGillicuddy and physical oceanographer Ruoying He of NC State - is several years into the development of a computer model to predict the intensity and location of blooms the toxic algae Alexandrium fundyense in the Gulf of Maine. Though the scientists are reluctant to make an official "forecast" until they can further test their models, colleagues in coastal management and fisheries believe the seasonal forecasting model can already serve as a useful tool for preparing the seafood industry for contingencies.

Seeds or "cysts" of A. fundyense naturally germinate and turn into swimming cells that rise from the seafloor around 1rst April of each year. By the end of April, cells usually begin to appear in large numbers in the waters off coastal Maine. The algae are notorious for producing a toxin that accumulates in clams, mussels, and other shellfish and can cause paralytic shellfish poisoning (PSP) in humans who consume them.

According to a seafloor survey conducted in the fall of 2007 by Anderson's team, the number of Alexandrium cysts-the dormant, seed-like stage of the algae's life-cycle-is more than 30 percent higher than what was observed in the sediments prior to the historic bloom of 2005. The seed beds were especially rich in mid-coast Maine, origin of many of the cells that affect western Maine, New Hampshire, and Massachusetts.

Other environmental factors then determine the extent to which the blooms spread down the New England coast. Much of the Northeastern United States was hit with record- or above-average rain and snowfall this winter, which will provide an extra pulse of fresh water and nutrients into coastal waters this spring. The blend of nutrients and fresh water into salty sea water can improve growing conditions for the algae.