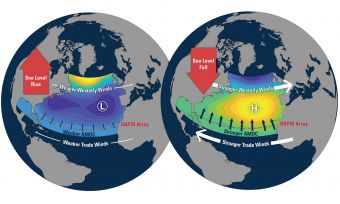 A study by the Woods Hole Oceanographic Institution (WHOI) clarifies what influence major currents in the North Atlantic have on sea level along the northeastern United States. The study, published June 13 in the journal Geophysical Research Letters, a biweekly peer-reviewed scientific journal of geoscience published by the American Geophysical Union, examined both the strength of the Atlantic Meridional Overturning Circulation (AMOC), the zonally-integrated component of surface and deep currents in the Atlantic Ocean, and historical records of sea level in coastal New England.

The AMOC is characterized by a northward flow of warm, salty water in the upper layers of the Atlantic, and a southward flow of colder, deep waters that are part of the thermohaline circulation. These 'limbs' are linked by regions of overturning in the Nordic and Labrador Seas and the Southern Ocean. It is is an important component of the Earth's climate system and is a result of both atmospheric and thermohaline drivers.

“Scientists had previously noticed that if the AMOC is stronger in a given season or year, sea levels in the northeast U.S. go down. If the AMOC weakens, average sea levels rise considerably,” says Chris Piecuch, a physical oceanographer at WHOI and lead author on the paper. “During the winter of 2009-2010, for example, we saw the AMOC weaken by 30 per cent. At the same time, the sea-level in our region rose by six inches. That doesn’t sound like a lot, but a half-foot of sea-level rise, held for months, can have serious coastal impacts.”

“But, it’s been unclear whether those two things, coastal sea level and the AMOC, are linked by cause and effect,” adds Piecuch. Although the study confirmed that AMOC intensity and sea level seem to change at the same time, it found that neither directly causes changes in the behaviour of the other. Instead, both seem to be controlled simultaneously by variability in major weather patterns over the North Atlantic, such as the North Atlantic Oscillation (NAO).

“Changes in the NAO alter both AMOC and sea level separately," says Piecuch. "As the NAO changes, it affects the trade winds, which blow from the east across the tropical Atlantic. When the NAO is high, the trade winds are stronger than normal, which in turn strengthens AMOC. But at the same time, the westerly winds over New England are also stronger than usual. Together with unusually high air pressure on the northeast coast, this lowers the average sea level. It’s wind and pressure that are driving both phenomena.”

According to Piecuch, a study like this was not even possible until recently. For the past few decades, satellite imagery has given scientists a record of movement at the ocean’s surface but has been unable to detect currents below the surface. Starting in 2004, however, an international team of scientists began maintaining a chain of instruments that stretch across the Atlantic between Florida and Morocco. The instruments, which are collectively called the RAPID array, hold a variety of sensors that measure currents, salinity, and temperature. “RAPID doesn’t resolve the details of every individual current along the way, but it does give us the sum total of the ocean’s behaviour, which is what the AMOC represents,” Piecuch notes.

These findings are particularly important for residents along the northeast coast of the U.S., he adds. Existing climate models suggest sea levels will rise globally in the next century due to climate change, but that sea-level rise on the New England coast will be greater than the global average. Scientists have traditionally assumed that the heightened future sea-level rise in the northeast U.S. is inextricably tied to a weakening of the AMOC, which the climate models also predict. But, given the study’s findings, that assumption might need to be revisited, Piecuch says. “The problem right now is that we only have about 13 years of AMOC data to work with. To get a better sense of how these two things relate to one another in the long term, we’ll need to wait for a longer stretch of observational records to become available,” he says.

Details of the Study

Also collaborating on the study were Glen G. Gawarkiewicz and Jiayan Yang of WHOI; Sönke Dangendorf of Universität Siegen in Germany; and Christopher M. Little and Rui M. Ponte of Atmospheric and Environmental Research, Inc.

The work was supported by National Science Foundation awards OCE-1558966, OCE-1834739, and OCE-1805029; NASA contract NNH16CT01C; and the J. Lamar Worzel Assistant Scientist Fund and the Penzance Endowed Fund in Support of Assistant Scientists at the Woods Hole Oceanographic Institution.

The Woods Hole Oceanographic Institution is a U.S. private, non-profit organization on Cape Cod, Mass., dedicated to marine research, engineering, and higher education. Established in 1930 on a recommendation from the National Academy of Sciences, its primary mission is to understand the oceans and their interaction with the earth as a whole, and to communicate a basic understanding of the oceans’ role in the changing global environment. www.whoi.edu.