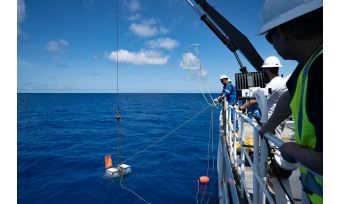 The Five Deeps Expedition is the first manned expedition to the deepest points in each of the world’s five oceans. A team of more than 30 people will travel around the world with a first-of-its-kind, commercially rated Triton submersible called DSV Limiting Factor to dive to the bottom of the Puerto Rico Trench (Atlantic Ocean), South Sandwich Trench (Southern Ocean), Java Trench (Indian Ocean), Challenger Deep (Pacific Ocean) and Molloy Deep (Arctic Ocean). Several additional global highlights will include a potential dive to the wreck of the USS 'Indianapolis', which was located in 2017.

Deepest Points in the Ocean

The team also plans to dive to the bottom of the Meteor Deep (South Atlantic) as well as the Diamantina Deep (southern Indian Ocean), Philippine Trench, South Solomon Trench (Solomon Islands), and Tonga Trenches to enhance the world’s knowledge of these seldom, if ever, visited deep ocean features.

The Five Deeps Expedition includes dives to the deepest point in each of the five oceans. Along the route, the team will be taking opportunities to dive areas of scientific interest or historical importance. Further information about additional dives will be announced over the course of the expedition.

Dive into the project

The May/June 2019 edition of Hydro International will include an article written by Heather Stewart, member of the team. She will ‘dive’ into the background of the project and explain more about the expedition. Hydro International’s printed version will be published in early June.