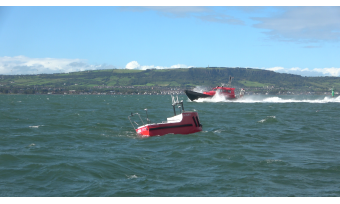 Ultrabeam Hydrographic, a hydrographic survey company, recently teamed up with Unmanned Survey Solutions (USS) to conduct two subsea gas pipeline inspection surveys in Northern Ireland. Both companies are based in the UK and offer unmanned platforms as an alternative to traditional manned survey vessels.

The contract was awarded by Mutual Energy, who were keen to gain experience on how unmanned autonomous platforms can increase the knowledge of their pipelines while reducing risk and overall cost. Shane Rafferty, group engineer explained: “Mutual Energy contracted with Ultrabeam Hydrographic in August 2020, following an open competitive tendering process, to perform inspection surveys of our Larne and Belfast Lough crossing pipelines, key components of Northern Ireland’s natural gas transmission network. In a first for Mutual, an Unmanned Survey Vessel (USV), the USS Accession, provided by Ultrabeam’s project partners Unmanned Survey Solutions, was to be deployed.”

“The project planning phase moved swiftly and seamlessly such that execution of the works commenced only a matter of a few weeks later, and was performed as programmed despite some inclement weather and sea states. We were pleased to see early data capture and quality provide assurance of equal standards to previous surveys, such that the assets could be returned a clean bill of health. Mutual Energy would like to thank the entire project team from Ultrabeam Hydrographic and Unmanned Survey Solutions for their diligence and expertise in successfully delivering the project, and can commend the benefits of the innovative technology for such nearshore surveys.”

The challenges faced by these route surveys were solved by using an Accession Class USV built by USS. This 3.5m USV was fitted out with an R2SONIC 2024 high-resolution multibeam sonar, SBG Ekinox Navsight Inertial Navigation System and sound velocity sensors from Valeport. The data was acquired in QINSy, which was also used as the autopilot for the autonomous line running. James Williams commented: “The survey conditions were marginal with strong winds, tidal currents and waves; however, the vessel’s stabilization fins ensured that the data was exceptionally clean. We were also able to get closer inshore than on any previous surveys using manned vessels. The vessel was really put through its paces on these deployments and I’m pleased to say that it performed beyond everyone’s expectations.”

Ultrabeam is backed by decades of experience in coastal hydrographic and geophysical survey. The company also builds its own unmanned platforms for detailed sonar and laser asset inspection. Project manager Simon Baldwin commented: “We are very happy to have provided Mutual Energy with a great dataset and deliverables as part of their 2020 subsea pipeline inspection campaign. The environmental conditions on-site in Northern Ireland were far from benign and the USV and operational team worked faultlessly to provide great bathymetric data, safely and efficiently. This project was an ideal opportunity for us to continue to show what can be achieved autonomously, on schedule and to a high standard.”

Two pipeline surveys were conducted along the Larne and Belfast Loughs using the Accession 350 USV. The weather was marginal, no incidents occurred and the project was completed on time and to budget. The joint venture between Ultrabeam and USS proved that autonomous surveys of inshore pipelines can be conducted safely and cost-effectively compared to traditional manned solutions.