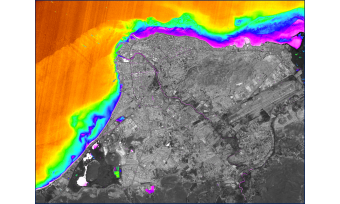 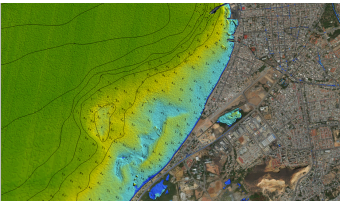 Ever since the launch of the VRSS-2 Antonio José de Sucre satellite in 2017, researchers have been looking into how best to use and apply the information that it provides for the benefit of environmental development and sustainability. For example, the bathymetry derived from satellite images is very beneficial for hydrographic services, since it allows information to be obtained that has not been explored with traditional acoustic methods. The Venezuela Hydrographic Office has started to use this method, also to improve its hydrographic coverage.

The Antonio José de Sucre satellite is Venezuela's third artificial satellite. It was launched from the Jiuquan Launch Center in Gansu Province, China, and captures images for cartographic survey work, with a new high-definition camera and an infrared camera for soil, water resources diagnosis and seismological prevention data.

Lt.Cmdr Daniel Rojas Contreras, master in hydrography and specialist in marine cartography and data processing and currently head of marine cartography at the Venezuela Hydrographic Office, is conducting research in cooperation with the Bolivarian Agency for Space Activities (ABAE) into the use of these high-resolution optical images to calculate depths by applying the Stumpf algorithm, using the green, blue, red and infrared bands of the satellite images.

A satellite image of the east of Venezuela was used, which included Cumaná, a city in the east of the country, the Gulf of Cariaco, and Puerto De Sucre, which serves various locations and industries. Maritime traffic levels are high, as there is a lot of tourism and fishing activity in the area.

The image used was provided by ABAE and captured on 29 November 2019, with an optical resolution of four metres for the green, blue and red band, allowing the processing to obtain perfect depths and digital seabed models.

The Stumpf (2003) model was applied, which is based on the assumption that each band has a different level of absorption depending on the depth, therefore generating the relation between the blue, green or red bands. A characteristic shallow water area can be identified near the port, called Bajo Brito, which was captured, modelled and represented almost in its real form with spectacular images and accurate depths that coincide with acoustic methods.

At the end of the application of the algorithm, significant differences were identified between the survey depths and the paper chart VE-503 Puerto de Cumaná. This area has high levels of sedimentation at the exit of the Gulf of Cariaco and has not been updated since 2010; however, very serious problems of low water depths due to sedimentation have been seen, due to the presence of strong marine and underwater currents. This type of image analysis makes it possible to determine the extent of this problem in the northern area of ​​Cumaná, where it affects navigation for tourism and fishing.

For this analysis, the optimization approach for a vertically invariable water column was used. A subcategory of this is a relation that derives the bathymetry based on the relationship between two bands applied in the Stumpf model.

The bathymetry estimates derived from the Antonio José de Sucre satellite images were evaluated using a large number of field sampling points obtained with acoustic methods, yielding very good results up to the extinction depth, which in this case was calculated to be ten metres.

The use of the VRSS-2 satellite images will allow review and analysis of areas that have not yet been surveyed, and enable important advances at very low costs, resulting in great benefits for the construction of large infrastructure, science and marine technology, port design, tsunami modelling, the development of coastal management plans and the safe planning of new surveys. Bathymetry derived from satellite images is a faster and more cost-effective solution than traditional methods.

This study and the applicability of SDB will greatly advance hydrography in Venezuela and increase the coverage of hydrographic surveys, as it is a new, feasible technique that is capable of providing very good results in a short time.

The author would like to thank the Bolivarian Agency for Space Activities (ABAE Agencia Bolivariana de Actividades Espaciales), the Hydrographic Office of Venezuela and the International Hydrographic Organization.