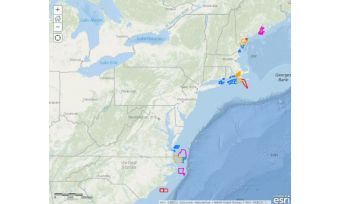 The NOAA Coast Survey is posting its three-year survey plans and making them publicly available at the Planned NOAA Hydrographic Survey Areas (2015-2017) in ArcGIS Online. In addition to seeing the outlines of planned survey areas for the next three years, users can obtain additional metadata (project name, calendar year, and area in square nautical miles) for each survey by clicking on the outlines.

Because of the responsibility and its relative precious resources, Coast Survey develops long-term survey priorities using a number of parameters, including navigational significance, survey vintage (when the area was last surveyed), vessel usage, and potential for unknown dangers to navigation. Coast Survey then culls the long-term priorities for annual survey plans using other factors such as urgent needs (recent grounding, accidents, etc.), compelling requests from the maritime industry and U.S. Coast Guard, traffic volume, and identified chart discrepancies.