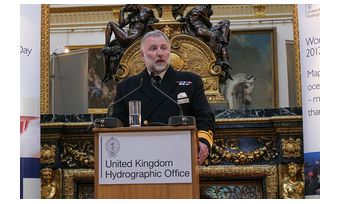 The Alexander Dalrymple Award is given by the United Kingdom Hydrographic Office (UKHO) in recognition of an outstanding contribution to world hydrography. First presented in 2006, it is named in honour of the first Hydrographer of the Royal Navy in 1795.

The Award was presented at reception in London by Rear Admiral Tim Lowe, UK National Hydrographer and Deputy Chief Executive of the UKHO. Admiral Lowe commented: “Adam has made a significant contribution to capacity building and improving maritime safety in the Southwest Pacific region. As National Hydrographer, he has a wide ranging and busy portfolio from managing a very efficient national and regional production/delivery unit through to representing New Zealand at a variety of strategic fora within the International Hydrographic Organization (IHO).

“He is also a member of the New Zealand Geographic Board (NZGB) and a hugely active Capacity Building Coordinator for the South West Pacific Hydrographic Commission (SWPHC). In the latter, he has delivered significant training and mentoring initiatives in areas such as maritime safety information, hydrographic surveying training and nautical cartography training. These aspects have significantly benefitted developing Member States across the breadth of an enormous sea area.”

The award presentation took place at a reception held at Lancaster House in London to mark the UK Government’s celebration of World Hydrography Day 2017, a United Nations-endorsed recognition of the vital role of hydrography in supporting safe navigation and sustainable use of the world’s seas, oceans and waterways.