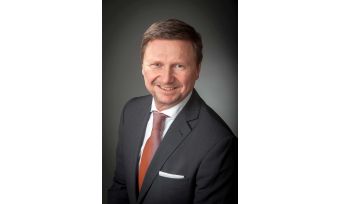 During the first IHO Assembly taking place from 24 to 28 April 2017 in Monaco, the represented Member States will elect the new Secretary-General and Directors. The nominees present themselves by answering the same 5 questions. This multi-interview is available at www.hydro-international.com/iho-2017. Dr Mathias Jonas (Germany), nominated for Secretary General, answers 5 questions.

The exercise of hydrography is an obligation of coastal states under IMO SOLAS V/9. IHO is the competent organisation to assist here in any respect. This should be brought to the attention of the countries that are not yet an IHO member, e.g. using UN associated bodies and direct contacts in particular via IMO. Beyond this, IHO membership offers access and active participation to the global process of cross border cooperation and technical standardisation. The latter is no longer limited to sea survey and nautical cartography but addresses issues of the processing of physical marine data in a much broader scope. The request for such information beyond safety and efficiency of navigation is rapidly growing and IHO membership can help to set up such marine SDI environment nationally as well as to associate regionally. Since multilateral cooperation is overshadowed by political disputes in some regions, IHO´s infrastructure of Regional Hydrographic Commissions offers channels to collaborate on technical matters. IHO is partnered with many other international organisations which together form a system of global ocean governance. Becoming a member helps to improve national visibility within this framework and opens options of fundraising for capacity building measures via the well formatted IHO paths.

No question about it that the existing programme on capacity building should not only be continued in the same fashion but expanded and additional funding resources should be sought. Arguing about the relevance of hydrography for any maritime environmental activity, I propose to approach the Global Environment Facility, an international financial mechanism with a partnership of 183 countries, international institutions, civil society organisations, and the private sector.  Equally important to the educational aspect, are the technology and knowledge transfer element of capacity building. Joint activity of the public sector, academia and private industry might convince local politicians to become more supportive for hydrographic subjects on the whole. The UN interaction with regional organisations, e.g. the African Union, can help to set up such dialogue resulting in cross border development projects of neighbouring countries of this continent. And there is another path to raise the general attention for hydrography: A series of lectures about the nature of our science and their applications to be held at IMO´s World Maritime University in Malmö, Sweden would directly address the world´s maritime leaders of tomorrow. The fact that the IMO Secretary General, Mr. Kitack Lim, graduated from WMU advertises for this concept.

IHO should step up cooperation with organisations with which it shares specific interests such as IOC, WMO, IALA, FIG, etc. The new IHO council could serve as a forum where partnered organisations will regularly express their expectations towards IHO. As for the UN relations, one could hardly find a topic which is more dependent on international cooperation than the global ocean governance. IHO should form alliances with its allies to move it to the forefront of the global agenda and the UN is the natural partner for this. The successful approach of numerous European hydrographic offices to bid as consortium on coastal mapping tenders of the European Union assisted by the relevant IHO working group may serve as a blueprint for similar activities in relation to other regional organisations. For more specialised partner organisations, projects such as the development of customised specific maritime data standards equally fostered by both parties appear to be a promising approach.

The established collaboration with the PI is traditionally focused on technology providers for sea survey and shipborne navigation equipment. Today, global providers of geoinformation do not distinguish between land and sea bound information. Their ambition is the provision of seamless solutions in geographic and thematic terms for all the physics of sea information. Smart sensors to convey dynamic information in real-time add to this picture. Modern technologies for big data analytics opening up possibilities to generate new insight and added value from hydrographic data exploitation. IHO is challenged to attract such companies by bespoke work items in standardisation and technology transfer as an element of capacity building. IHO´s contemporary offer is the cross sectorial standardisation of maritime data streams of all kinds based on one coherent technical concept. The second track is the acquisition of and access to the data itself: crowdsourcing by humans, means of flying, swimming and diving autonomous working measurement devices and information re-use – all are topics of commercial relevance. Geoinformation PI and IHO should federate their efforts on these fields. Squired by IHO´s authority, industry and research partners may identify here commonly funded projects for mutual benefit.

The establishment of global ENC production on the basis of an IHO suite of standards marks the entry of the international collaboration in hydrography into the digital age. However, technically, ENCs are merely a digital equivalent of the paper chart concept for the purpose of ship´s surface navigation. Through this limitation though, the underlying basis of laboriously collected information is much too less exploited. Some hydrographic offices have already started their transition from a chart oriented approach towards a data-centric approach striving to become the leading marine geospatial service of their nation. They are encouraged to create new products by the demands of an emerging group of new stakeholders who have uses for maritime information far beyond travelling the seas. The future will see cloud based data provision, smart presentation customised to specific themes of various user groups and autonomous shipping supervised by automated algorithms. Administration, industry, academia and – the people – expect to get easy and digital access to our engineer´s knowledge of the seas. We are all called up to meet this expectation and IHO has to cope with for the proof of their necessity.