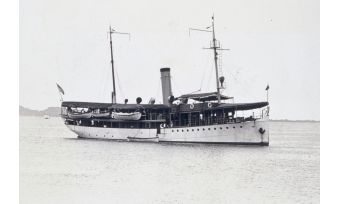 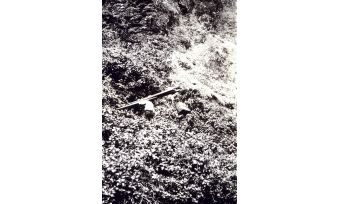 On New Year’s Day 1916, S. Davis Winship, a young Coast and Geodetic Survey (C&GS) officer, began a life-changing voyage, one that would take him far from his New England roots to a life in an exotic tropical land. Much of what follows is in Winship’s own words.

Prior to embarking for the Philippine Islands, he had been in the C&GS for two years and had worked off the rocky shores of New England, the comparatively calm waters of Chesapeake Bay and the sounds of North Carolina, and in the deep, but pinnacle-studded, waters of Alaska’s Inside Passage. He arrived in Manila on 1 February and was assigned to the C&GS ship Fathomer. The ship sailed 6 March for its working grounds on the south shore of Mindanao Island. Here Winship received his baptism of fire. As he relates: “What looked like an easy job for me was the ascent of a 2,300 foot mountain, with a Moro guide, and two cargodores or porters to carry food and tools. It turned out to be more than it looked, for there was no trail and it took us eight hours to cut our way through the jungle to the summit, an hour to do the necessary work and three and one half hours to fall back down the mountain. The ship looked pretty good when we finally reached her that night at nine o’clock.” This was but the beginning.

The next day he “was landed on the beach with ten days supplies, six men and the necessary tools to build an eighty foot high scaffold. I hired four Moros to assist and we were soon busy getting out lumber and building the signal. It was hard work, because all the timber which grows near the water is swamp hard wood and very heavy, whereas in fact, it will not float….”

This was followed by a ten-day trip to a mountain five or six miles inland and 3,500 feet high, to build and occupy a triangulation station. “This trip was to take him into the heart of the Manoboe Country, a country whose people were little known, and whose attitude to outsiders, with whom they have practically no dealings, was absolutely unknown. He hired six Moro cargadores and an old Manoeboe guide who proved invaluable when encountering other Manoboes, and as an interpreter: “Speaking to the natives here is quite a stunt. On this trip I took, as usual, six men from the ship. They are Tagalogs, or “Manila Man”. When I wish to talk to a Manoboe, I called one of these Tagalogs, and in a mixture of English, Spanish, Tagalog, and Profanity, explained my wants to him. He passed it on to a Moro who understood Tagalog, who in turn passed it on to a Moro who understood more Manoboe, he giving it to the old man …. who finally gave my message, or something like it to the person with whom I wished to talk. The answer came back the same way.”

Winship managed to procure some Manoeboe cargadores in an unorthodox, and by today’s standards, perhaps unacceptable manner: “After I had filled these savages with rice, we started the talk fest, consuming many cigarettes meanwhile. These cigarettes, by the way, I buy for the purpose for fifteen cents gold per hundred, and they are a great ‘Open Sesame’ to conversation. Finally they decided to go, and though we were still overloaded we started, intending to capture others on the way. Half an hour later my savages dropped their loads with a yell and dove into the bushes. After a few minutes struggle they emerged again bearing another struggling Manoboe of about their own size and of similar appearance except that he was naked and was armed with bow and arrows. They announced that he was going to be a cargodore whether he wanted to or not, but he seemed to think it a great lark, and soon made himself a pack and away we went. The Manoboes singing and shouting like boys out of school. An hour later they corralled two more by the same tactics and we were now more practically loaded.”

Although a short airline distance, the trail to the mountain was quite circuitous and it took two days just to reach the foot of the mountain. Along the way, Winship encountered a friendly datu (chief) who directed his son to accompany Winship as a bodyguard. This was fortunate as, “Again we started, and the trail now became difficult. Up a hill, steep as the side of a home and down the other side, across a mountain torrent and along the face of a steep vine covered cliff where there was the barest toe hold which must be helped out by clinging to the vines. And here the datu’s son came in. Always at my back, with his spear pointing out which vines I was to trust, for some are tough as steel while others are tender as paper. Time and again did that spear correct my ignorant choice, or kept me from grasping some poisonous vine which would have made my hands sore for forty-eight hours, and when I waded across a rushing stream he waded below me.”

To climb the mountain itself took another half day. Winship remarked, “Up we went, and how I envied the natives their bare feet. Twenty of them climbing … with fifty or sixty pounds on their backs, while I struggled for every foothold. Many times did my nurse hold on by his eyebrows in order to help me to a better foothold. Finally we reached the top and got our breath, and we were in a dim fog. Except an hour or two in the morning these hills are cloud capped continually at this time of year, which makes it very difficult to do our work. We stayed up there three days, and each night as I lay in my hammock, I thought how much safer I was there unarmed with twenty savages, than the average man in a large city who is exposed to all kinds of accidents and violence.”

Two months later Winship wrote: “I have twice returned to that same mountain, and the friendship of the Manoboes whom I described, has been invaluable, as they have passed the word along, and now, though twenty five miles from Sangay, the Manoboes here know that I am a friend of Datuadil, and are doing everything possible to make it easy and pleasant for me. I have almost daily gifts of corn, chicken, eggs, papaya, bananas, or plantain and I never lack cargodores and guides.”

It wasn’t all that easy though. Winship allowed himself a complaint in a letter home: “… Bees are very thick and I have had so many encounters with them that I am becoming callous. Centipedes and scorpions, which I used to think were deadly poison, give me no more than a passing shudder. Their sting is excruciatingly painful, but for a person in good health, they are by no means dangerous. Then there are leeches, small blood suckers, about an inch long, which get into your shoes, and if there is a hole in your sock they always find it and make a troublesome sore, but I manage to keep them out most of the time.”

Such was the work of the C&GS officer in the Philippine Islands in the early twentieth century. Because of the transfer of C&GS officers to the armed services during World War I, replacements were not sent to the islands and Winship’s tour was extended. This was fortunate for him as he was given command of the <i>Fathomer<i> in 1917 after only three years total service. He survived the worldwide influenza epidemic of 1918 but wrote of crews of the <i>Pathfinder <i>and <i>Romblon<i> being tied up with their whole crews sick. He also mentioned a small village of fifty that he visited and, when coming back a month later, only five individuals had survived. Davis Winship remained in the Philippine Islands and resigned in 1920. His superior officer noted, “As he was a very competent individual, this was unfortunate for the C&GS”.

By this time Davis Winship had decided to make the Philippine Islands his home. He married a beautiful Filipino woman and had three children. He went into business and by 1930 was the president and general manager of the Eastern Isles Import Corporation, a large manufacturer of hand embroideries. He made three-quarters of a million nightgowns, and half a million baby dresses that year. Winship was quite prosperous and made many trips to the United States. In 1936, he was the first customer in the world to buy an around-the-world airline ticket for the then princely sum of $2,308.33. As one leg of this trip was to take the Zeppelin Hindenburg across the Atlantic, this trip was never completed as the Hindenburg had crashed and burned while docking at Lakehurst, New Jersey on 6 May 1937.

By this time, ominous signs were clouding the future. That Winship understood the world situation is shown in the following written in November,1937: “We are all somewhat nervous over the Japanese invasion in China. So many of the news dispatches seem to convey the impression that this is just one of those accidental little skirmishes that don’t amount to much. It is a major war, part of the deliberate Japanese plan to dominate everything from the 180th meridian to Suez. They never will stop going until some combination of nations literally blows them out of the water, sinks every naval vessel they have.”

Although he believed that “The Lord takes care of fools, drunkards, and ex-Coast Survey officers”, he was a poor prognosticator and wrote on 25 November 1941, “… officially the Japanese will do everything possible to avoid armed conflict with the US” Pearl Harbour was attacked two weeks later and Manila bombed a few hours later on December 8. Manila was occupied by Japanese forces on 2 January 1942. S. Davis Winship was not heard of for over three years as he was incarcerated at Santo Tomas and then Los Banos prison camps. He was liberated from Los Banos on 23 February 1942, in a famous military raid. He was one of the last ones out. His health was broken and he returned to the US for two years, returning to the Philippines in 1947. However, his lifelong voyage to the Philippines came to an end as his body was too decimated to continue on. He died on 24 December 1947. A friend writing of his passing to his relatives in the United States, referred to him as ‘Cap’, probably a name he retained from his days as captain of the C&GS Steamer Fathomer.

Editor’s note: Thanks to Mr. David Record and the family of S. David Winship for providing me with an account of Winship’s life.