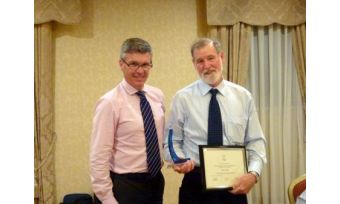 The AHS AGM was held in Sydney in November with a small gathering meeting at the NSW State Library followed by an informal dinner. The meeting saw a change in the executive board with the president Alec Millett not seeking re-election. Alec held this position for four years and his efforts are much appreciated. The new office bearers for the AHS are:
• President: Commander David Crossman, RNZN
• Secretary: Nick Goodwin
• Treasurer: Steve Duffield

The executive board also agreed to the AHS transitioning its website to a cloud-based solution. The transition has already commenced with membership capabilities implemented. For membership renewals, the website is http://ahs.wildapricot.org.
The rest of the website will be migrated over early in 2015.

The existing website http://www.ahs.asn.au will be maintained for content until the new site is fully developed and populated.

During dinner, Mr. Wayne Dunn (Australian Hydrographic Service) was presented with his AHS Award of Merit – Career Achievement in Hydrography. This award recognises Wayne’s outstanding contribution to hydrographic surveying and mine warfare operations in support to the Royal Australian Navy (RAN) over a period spanning 45 years.

The AHS will be hosting the Australasian Hydrographic Symposium 2015 in warm, sunny Cairns in November 2015. Cairns is the gateway to the Great Barrier Reef and is a beautiful, tropical city in northern Queensland – a great place to be, particularly for anyone in wintery northern climates….. We look forward to seeing you next year.

For more information
visit the AHS website at:
http://www.ahs.asn.au/conferences.html

Mr. Ron Furness, IIC’s Manager for Pacific Region, was presented with two awards at the Australasian Hydrographic Society Annual Dinner in Sydney Australia on 14 November 2014. The president of the Society at that time, Alec Millett, acknowledged, by presenting the award, Ron’s service over many years as Treasurer of the Society.

In addition, the Society’s prestigious Order of Merit was awarded by the membership, acknowledging Ron’s long-standing, meticulous and uninterrupted support over many years upholding the values and aspirations for which the Society stands. IIC has seen first-hand Ron’s commitment to the hydrographic industry at large over the years, and is thankful to have him as a valued member of the IIC family.