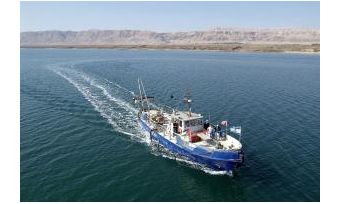 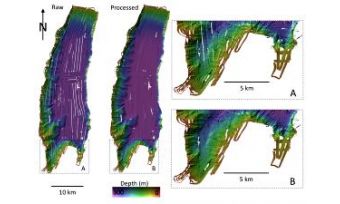 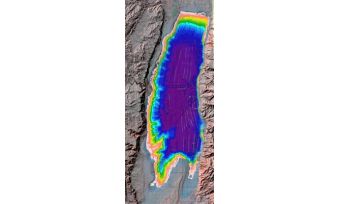 The Dead Sea is the world’s lowest water body and among the saltiest (330ppt). To enable multi-beam coverage of this historical lake, ELAC Nautik took up the challenge of modifying their SeaBeam 1050 multi-beam to deal with extreme sound speeds by introducing a firmware ‘tweak’ changing the beamforming direction to account for a higher sound speed which was at that time not exactly known. While data acquisition was possible, initial results showed severe refraction issues that required a complicated procedure of ‘de-tweaking’ and re-computing.

The Dead Sea is unique. The 18x67km hypersaline terminal lake is the lowest and saltiest of its size on Earth. Formed 3 million years ago on the Syrian-African Rift as the Red Sea opening moved Jordan 103km north, its mineral-rich waters contain the remains of numerous inundations by adjacent seas. Due to extensive mineral extraction and diversion of rain runoff and Jordan River water, its level is dropping at a rate of more than 1m per year (presently -425m). Rich in history (biblical destruction of Sodom and Gomorrah, Lot's wife as a pillar of salt, Zealots and Romans at Masada, Dead Sea Scrolls), it is a source of cosmetics and a health oasis with reduced UV radiation, black muds, sulfur baths, and 330ppt salt water to treat psoriasis and other afflictions. Recent interest focuses on the effects of the lowering. Thousands of sinkholes have been produced by fresh groundwater dissolving buried salt bodies and causing collapse. To help alleviate this, the World Bank is considering a conduit via Jordan to bring seawater from the Red Sea to raise levels, produce hydroelectric power and desalinated water. For scientists, recent International Scientific Continental Drilling Program coring of its varves should offer clues to paleoclimates.

The first methodical survey was carried out by the US Navy from three copper boats in the summer of 1848. They made 162 soundings with a fathom-marked linen sounding line that, without fresh water for cleansing, gradually contracted. Their soundings indicated a V shape to the basin, with maximum depths of 397m below the -401m sea level (798m maximum). In the late 1950s, Neev and Emery derived 2000 soundings from 310km of Kelvin-Hughes echo sounder lines over canyons in the SW quadrant, then under Israeli control. In 1974, Neev and Hall carried out a geophysical survey over most of the lake with an ELAC 30kHz echo sounder, Miniranger electronic navigation, continuous sparker seismic profiling and proton magnetometer. The 530km of track yielded 5,148 soundings which showed a flat bottom some 50m shallower than the suspect 1848 soundings. The northern basin is asymmetric, with a steep (up to 30°) eastern fault-bounded margin, and a western margin (7° average) with numerous canyons. The maximum depth was estimated at 730m, with a ±3m uncertainty occasioned by seiches in the stratified layers that altered the depths recorded over the deepest flat bottom. These seiches presaged the dramatic 1979 overturn of the previous 350 years' stratification.

The development of multi-beam sonar and use of a Kongsberg-Simrad EM1002 for the ongoing Israel National Bathymetric Survey offered the possibility of expanding the less than 10,000 soundings by several orders of magnitude. But how would multi-beam sonar work in the Dead Sea? Further evaporation and return of end-brines from the southern evaporation pans had surely raised the sound speeds above the 1776m/s suggested by the survey thirty years earlier. Furthermore, the 1979 overturn had resulted in a mixed sea with the potential for quite variable sound speeds. And recent research had shown the potential of submarine groundwater discharges from the adjacent heights to introduce extreme sound speed contrasts. Operations in the Dead Sea show that salt deposition is a major problem. The moored IOLR meteorological buoy in 85m of water ( 1) must be washed with fresh water monthly in the winter and have its cable replaced biannually as deposition produces a 15cm diameter salt pillar whose weight can sink the raft. What would be the effect of salt deposition on the sonar transducers? And when should the survey be carried out? The Dead Sea Rift channels winds that produce rough seas in summer, producing dense waves that imperil navigation.

The survey was conducted with the R/V Taglit, a 23m, 60-ton vessel modelled on a German riverboat. An ELAC Seabeam 1050 50kHz sounder was used, based primarily on the fact that ELAC had successfully used its SB1180 180kHz version for surveys in the hydrothermally challenging 1999-2001 USGS surveys in Yellowstone Lake. ELAC engineers felt that modifications would allow operation in the Dead Sea and a winter survey was planned for 2006-7 with collaboration with Jordanian scientists for the eastern half. In December 2006, the equipment was installed on a rotating arm amidships and tests showed 108 beams available from the standard 126, over an arc of 150° but with an appreciable nadir gap. A Valeport industrial SV2000 probe, with a range of 500-2000m/s, was purchased and showed values of 1798-1840m/s, 20% above normal. The 30 day survey consisted of 235 hours of productive multi-beam operation over 815km of track at average speed 5 knots. Approximately 7.84 million soundings were recorded of which about 10% were rejected. The transducers gradually developed a film of salt, which was rinsed with freshwater every few days after recovering the rotating arm. Once redeployed, the jury-rigged arm required recalibrating patch tests.

Initial results met expectations regarding the topography: a flat bottom with shear eastern flank and a canyon and rill-scarred western margin. The post survey processing, using CARIS HIPS, showed numerous artifacts, predominantly two high symmetrical across track shoulders over the planar areas of the sea. Following months of phone consultations and a visit to ELAC in parallel with flagging of spurious data, UNH-CCOM was approached for help. In discussions between UNH-CCOM's Jonathan Beaudoin and ELAC's Boris Schulze, and investigation using the UNB/OMG SwathEd software suite, it was determined that the initial hardware ‘tweak' had been done to cope with an expected sound speed of 1,594m/s, well below actual values of ~1,800m/s. A post-processing solution was designed in the UNB/OMG SwathEd suite to apply an additional compensatory tweak that adjusted the beam pointing angles to account for the difference between the designed 1,594m/s sound speed to the nominal true value of 1,800m/s using methods outlined in Beaudoin (2004). After correction, the maximum corrected water depth was 305m, with sea level at -421m. At present the cleaning is 75% complete.

Initial results from the post-processing efforts show that the nadir gap issues are not as problematic as previously thought and that the overall shouldering refraction artifact is corrected. Residual problems involve a residual refraction bias of the usual variety due to under sampling of the vertical sound speed structure and a saw-tooth across-track bathymetric artifact, most pronounced in the outer beams. The first is easily addressed using standard refraction bias suppression techniques, such as those in CARIS HIPS, whereas the second would require custom post-processing corrections. Pending the final generation of a 5m grid, the results will be presented within a texturised SPOT 2.5 m resolution image of the area on a poster at scale around 1:70,000. Stereographic mapping of the shores as the Dead Sea continues to fall will soon merge with these results, providing complete description of the Dead Sea basin as efforts to ‘Save the Dead Sea' hopefully raise the level in the intermediate future via a Dead Sea-Red Sea Canal.

Gonen Marine Services for operation of R/V Taglit , the Margaret Kendrick Blodgett Foundation for funding and our Jordanian colleagues.