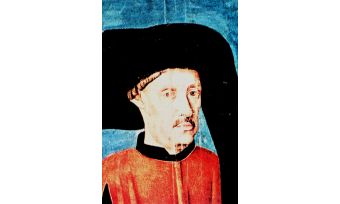 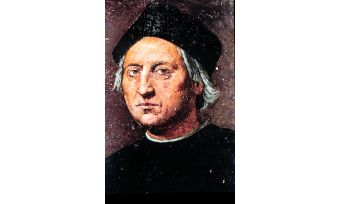 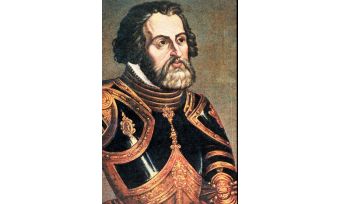 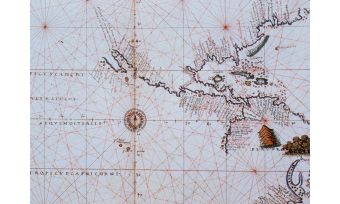 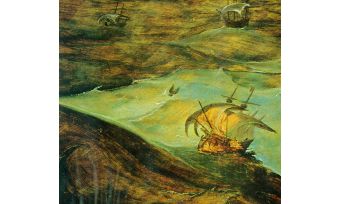 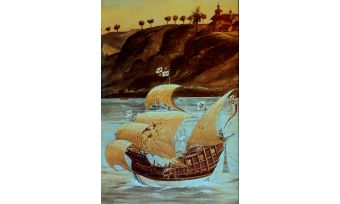 This month marks the 555th anniversary of the death of Prince Henry of Portugal, known as the Navigator, on 13 November 1460. Henry had set in motion a series of events that led to a new understanding of the earth, the discovery of the Americas, and on a darker note, the African slave trade. One month short of thirty-two years after his death, Christopher Columbus landed on a small island of the Bahamas.

Henry was driven ‘To discover what lay beyond the Canaries and Cape Bojador; ...to fulfil the predictions of his horoscope, which bound him to engage in great and noble conquests and attempt the discovery of things that were hidden from other men; to find Guinea’. Underlying all of this was the zeal of a crusader motivated to find a sea route to the mythical east African kingdom of Prester John in order to regain the Holy Land for Christendom. If he profited from these endeavours, so much the better. To do this, Henry sent a series of exploratory cruises down the west coast of Africa and into the Atlantic. In doing so, he launched the First Great Age of Exploration as he urged his captains down the coast of Africa further and further into the unknown until Gil Eannes in 1434 rounded the geographic barrier of the mind known as Cape Bojador, the Legendary Gates of Hell. With the passing of Cape Bojador, the shackles of superstition that had held medieval man close to home were burst asunder and the European exploration of the world began in earnest.

Before Henry’s death in 1460, Portuguese exploration extended down the coast of Africa and past Cape Verde. Portuguese navigators discovered many eastern Atlantic islands including the Azores, Madeira, and the Cape Verde Islands. The Canary Islands were known by the Greeks, Phoenicians, and Romans and had an indigenous population that Spain conquered in the 15th century. The Portuguese, besides extending their reach further down Africa, sent expeditions to the west as far as the eastern edge of the Sargasso Sea. In the course of these Atlantic expeditions, they made a great meteorological discovery, the “volta do mar” — the North Atlantic Gyre with winds circling the central northern basin of the Atlantic in a clockwise direction. It was these explorations that attracted the attention of other nations and helped Christopher Columbus convince King Philip of Spain that he could sail across the Atlantic to the East Indies on the southeast trade winds and return via the northern westerly winds to Europe.

The name Columbus is inextricably associated with the discovery of the Americas. The early hydrographic history of the Americas, and indeed all continents, is sketchy at best with a sounding recorded here, a sounding there; bottom characteristics noted occasionally; sailing directions and prominent features used in piloting chanced upon in journals and histories.

Fortunately, Columbus left a journal in which many hydrographic firsts in the New World were recorded. He was a skilful hydrographer, complementing his success as a pilot, navigator, and to some degree cartographer. To Columbus go many hydrographic accolades in the New World. His diaries contain a plethora of references to harbour descriptions, sailing directions, soundings, bottom characteristics, tidal observations and current observations. He also made geographic, meteorological, ethnographic and biological observations. Overall, he was a keen observer of the world around him, and, given the nature of his training and the tools available to him, his accomplishments were remarkable.

13 September 1492, a week’s sail from the Canary Islands, Columbus noted that at sunset the ‘needles of our compasses declined to the NW and in the morning they declined to the NE’. This was perhaps the first observation of the geographical variation of the magnetic compass. Four days later he entered the Sargasso Sea and noted (incorrectly) that the sea was less salty by half than it is in the Canary Islands. Like many mariners of the time, he believed that many types of birds indicated proximity to land. Accordingly, even in mid-Atlantic he often claimed proximity to land based on bird sightings.

On 19 September 1492, in Mid-Atlantic, he tied two deep-sea sounding lines together and sounded 200 fathoms into the weed choked Sargasso Sea. This was perhaps the first attempt to sound an oceanic basin. He didn’t find bottom, but during this same sounding operation, Columbus noted that the current was setting to the southwest, placing him on the southeast edge of the North Atlantic Gyre. It is conjectured that he observed the angle of his sounding line as it was streaming out from the ship to deduce the current direction.

On 12 October, Columbus made landfall and named this island San Salvador. Some of the natives that he encountered had small gold nose rings causing Columbus to inquire as to its source. Always, even on other islands, it was always said to be further on. By 14 October, he was commenting on how easy it would be to enslave these native Americans. Also on the fourteenth he had observed that minimal tide existed in the lagoon inside the reef line as ‘the sea in it moves no more than the water in a well’. The following day he observed a tidal current hindering his transit to the next island declaring ‘the tide detained me’ and then on the 16th he provided a bathymetric description of these steep-sided, narrow shelved islands: ‘...a couple of Lombard shots offshore [approximately 600 yards] there is so much depth that you cannot find bottom.’ On the 17th, he conducted the equivalent of the first hydrographic survey in the New World after anchoring outside of a potential harbour: “It seemed reasonable to me to look it over well and take soundings, so I anchored outside and went in with the small boats. It was fortunate that I did, for there was no depth at all.” Columbus was no desk hydrographer. He would clamber in the boats and direct the sounding operations.

Sunday, 28 October 1492, marks a milestone in the hydrography of the Americas. Columbus entered the present day Bahia Bariay, Cuba, and took the first recorded numerical sounding in the New World. His log reads “The mouth of the river I entered is 12 fathoms deep and quite wide enough to beat about in.” He followed this event 2 days later with the first recorded latitude: “I took a reading with the quadrant and Rio de Mares (Bahia de Gibara) is 42 degrees north of the equator.” The correct latitude was 21 degrees North. This error was perpetuated on various maps for at least the next 40 years. On 18 November at Puerto de Principe (Bahia Tanamo) he observed that, “The sea here rises and falls much more than in any harbour I have visited in this land...” He added to this observation that, “The tide is the reverse of ours [meaning at Palos, Spain]: when the moon is SW by south, it is low tide here...” Here he makes a landmark observation by inter-comparing states of tide on opposite sides of an ocean, an early precursor to the study and theory of tides in oceanic basins.

Columbus also made the first recorded sounding on the South American coast off modern day Venezuela of 2 fathoms on 10 August 1498; first recorded soundings on the North American continent off the coast of Honduras in August 1502; first observation of a probable Caribbean tsunami in the Gulf of Paria on 4 August 1498; and first theory of oceanic circulation suggesting that all waters follow the heavens from east to west. Quite a list of accomplishments for one man. Perhaps some of his theories were a little odd and did not stand the test of time but he showed himself to be a worthy First Hydrographer of the Americas. His perseverance, remarkable navigation, common sense in going ahead with the sounding boats to new harbours and anchorages, his skill with the lead, all show him to be a hydrographer of the first rank. (Fuson, Morison 1963, 1971, 1974, and 1983 were relied upon for information on Columbus. See Theberge, 1992, for Morison references.)

Although the Portuguese and Spanish maritime explorers all had to have knowledge of hydrography, some of the more interesting examples of hydrographic skills were shown by the overland explorers and conquistadors. Of those, the most talented was Hernando Cortes. Cortes combined the skills of warrior and diplomat with those of engineer, cartographer, and, on occasion, hydrographer. His 1524 map of the Gulf of Mexico is the first relatively accurate depiction of that body of water. In 1525, while on an expedition to coastal Mexico, he was confronted with an estuary that was gauged at 500 paces across. To turn back would have meant death while going ahead seemed impossible. “In a canoe with two Spanish sailors, Cortes sounded the whole bay and estuary, and everywhere they found four fathoms of water. They strung pikes together and sampled the bottom, which was covered with two more fathoms of mud and slime, making the total depth six fathoms…” Not to be daunted, Cortes directed the cutting of native timber and built a bridge across this expanse of water in six days.

Perhaps the most interesting sounding operation conducted by the conquistadors occurred in the Mississippi River near present day Ferriday, Louisiana, in early June, 1542. “Carrying with them a Biscayan called Ioanes de Abadia, who was a seaman and great engineer, they went out one afternoon to take some soundings. With all possible dissimulation, lest the Indians perceive what they were doing, they acted as if they were fishing and enjoying themselves in the water. Thus they found that the stream was 19 fathoms deep in the centre of its channel, and a quarter of a league wide; and with this discovery, they determined to bury the Governor within its depths” (Vega). Thus, the first soundings in the Mississippi were meant to determine the suitability of the river as a final resting place for its overland discoverer, Hernando de Soto.

By the time of de Soto’s death, a new understanding of the world had been attained. The outline of the continents was progressing, new trade routes established, and the vast expanses of the newly discovered Pacific Ocean crossed and the earth circumnavigated. Using primitive navigational and hydrographic tools, the great explorers of the day had crossed unknown oceans, used the lead to feel their way down newly discovered coasts, and sketched the outlines of their discoveries. The year after de Soto died, the Venetian cartographer Battista Agnese placed a note indicating the depth of water at the mouth of the Colorado River in the Gulf of California. The note read: “Vermilion Sea in which there are eleven brazas in the channel at high water and more than eight at low water.” This was the first mention of depth found on any chart or map, a first whisper leading to the modern nautical chart.