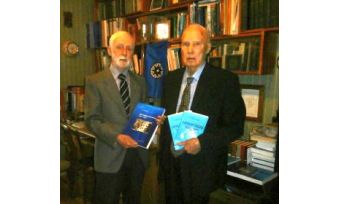 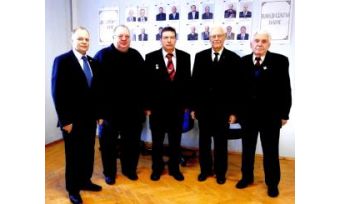 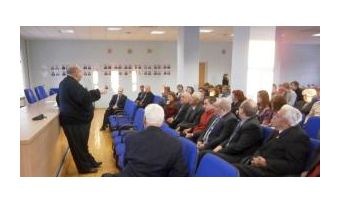 On 18 December 2012, an extensive session of the HSR Council took place at the State Research Navigation-Hydrographic Institute (SRNHI). The session was devoted to the 40th anniversary of the SRNHI Research Oceanographic Centre.

Since being founded in 1972, the Centre has been involved in the collection, processing and storage of global ocean data and its scientists have researched the information collected, including a definition of the Russian continental shelf border in Arctic regions.

The Centre’s employees were invited to the session. Also present were all the heads of the Centre from the past 40 years: Nikolay Kolyshev, Sergey Balyasnikov, and Konstantin Stavrov. Unfortunately, due to poor health the first head of the Centre rear admiral (retired) Aleksandr Sorokin could not attend. Also absent was Aleksandr Oparin, who passed away tragically in 2008.

All former heads discussed the difficulties encountered in creating and developing the Centre. A. Sorokin’s statement was read by HSR vice president Nikolay Nesterov.

After the official part of the session there was a buffet for all participants.

Gift to the Society

In these books he recorded the results from his diaries on the work which he conducted for many years. These detailed records include not only his work in the Hydrographic service of the Pacific fleet, but also his public work. The books not only include data and documents on historical events that took place in the USSR and Russia, but also on events in the Far East and Pacific fleet.

Particular attention should be paid to the carefulness and detail with which the data has been recorded, resulting in official documents.