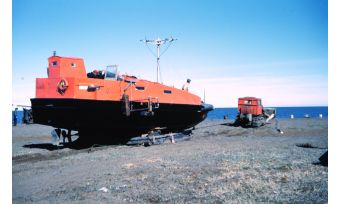 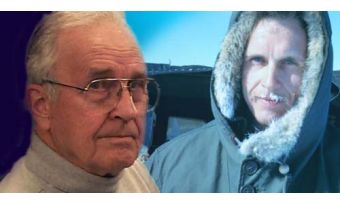 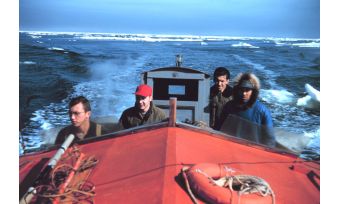 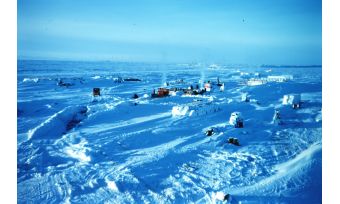 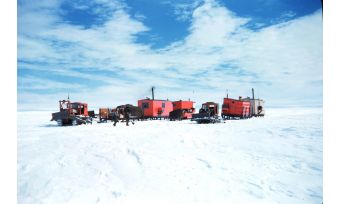 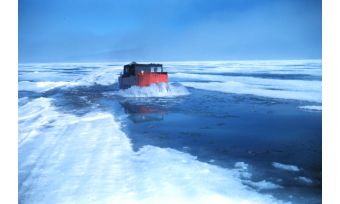 It seems ironic that in the early stages of the Cold War, the United States Government sent surveyors and hydrographic engineers to the coldest reaches of the North American continent. For these men, it was truly a Cold War. From 1945 through 1953, field parties of the United States Coast and Geodetic Survey were sent to survey sea routes through the Bering, Chukchi and Beaufort Seas as well as to conduct geodetic surveys to help position Distant Early Warning system radars and help delineate the vast resources of the Alaskan Arctic. These men toiled in obscurity beneath the midnight sun in summer and in the Arctic night of winter. This was dangerous difficult work in the interest of national security, writes Albert E. Theberge.

The roots of this endeavour lay in a project titled Pet 4, referring to Naval Petroleum Reserve No. 4 by the United States Navy Office of Naval Petroleum and Oil Shale Reserves. This project involved the Navy and the United States Geological Survey (USGS), but the Coast and Geodetic Survey, Air Force, and numerous contractors were involved in related tasks although not directly under Pet 4 supervision. Pet 4 was meant to discover additional petroleum reserves in the 180,000 square kilometre area between the Brooks Range and the Arctic Ocean. However, this area was also important for defence purposes as it is strategically located relative to global politics. It is also crossed by many great-circle air routes. Thus the C&GS was called in to survey sea routes for supply ships, provide geodetic control for both mapping purposes and the siting of various facilities, and determine magnetic declination for navigation purposes at selected points.

Because of the remote location, long distances between operational units, and extreme environmental conditions, logistics were a major factor in planning operations. The vast majority of supplies were brought to Point Barrow, the northernmost point of Alaska, by Navy convoy in the late summer in an operation known as Barex. The second Barex convoy, in 1945, was expedited by providing naval operating units with a hydrographic survey produced under the direction of Commander Ralph Woodworth, USC&GS, the first chief of what became known as the Arctic Field Party. The Navy ships unloaded all manner of heavy equipment including caterpillar tractors, wanigans mounted on runners for supply storerooms and living quarters, food supplies, and even LCMs to be used for transportation and hydrographic surveys during periods of open water.

The following year combined operations were begun in the vicinity of Point Barrow with geodetic surveys followed by hydrographic surveys. By early 1948, geodetic control surveys and some hydrographic surveys had extended from Dease Inlet to the east of Barrow and west to Wainwright, over 300km. Apparently little topographic work was done by the Arctic Field Party as in 1948, the C&GS flew aerial photographic missions of the Arctic coast from Barrow to Demarcation Point at the Canadian Border. By this time, sufficient experience had been gained in Arctic operations to commence the survey from Demarcation Point to Dease Inlet.

The C&GS learned from the experience of the Navy and USGS and used caterpillar tractors, weasels (small tracked vehicles), and wanigans (sheds mounted on skids used for both sleeping quarters and storage of supplies) for long distance travel. Two or three wanigans would be connected to each caterpillar tractor and all tractors, wanigans and weasels would make up a cat-train. The 1948 cat-train made its trek to Barter Island, 560km to the east, in mid-March where a camp was established. Travel in this area was complicated by the weather and terrain. Although helicopters could be used in the vicinity of Barrow to transport men and light equipment, they could not be used far from a maintenance facility. Caterpillar tractors pulling wanigans on skids could only be used in the winter months when ice on the ocean and inland lakes was sufficiently thick to support them. Airplanes on skis were used in the winter and early spring until the ice was too thin to support them and float planes from late June to early September when there was sufficient open water for take-off and landing. Some areas, such as on the barrier islands of the Arctic coast, could support wheeled aircraft during the months of melting. Geodetic work ceased during the period when ice was melting as the weasels, although amphibious, used for ground transportation could, and sometimes did, break through thin ice. The downtime from mid-May to mid-July was used to prepare four launches (Navy Landing Craft Mechanised - LCMs) for hydrographic work.

After establishing the Barter Island camp, geodetic work was completed from Demarcation Point to about 80 miles west of Barter Island. Starting in September, transportation again became difficult with the beginning of the freeze-up. Survey crews were evacuated and flown to Fairbanks for return to homes in Seattle, Washington and elsewhere. Wanigans, supplies and fuel were left behind for use the following year. In 1949, Commander Robert Earle, USC&GS, took over as chief of the Barter Island survey crew. He got his baptism of fire (or one might say ice) in mid-February as he and crew members were flown to the Barter Island camp in order to begin preparations for a move 240km to the west to Tigvariak Island. In his words: “it was pitch black dark when we let down on the small airfield on the north of the coast. We hadn't realized the meaning of the word cold until we stepped out of the plane, where the wind was blowing over 32km an hour and the temperature was 39 degrees below zero. When we faced the wind it seemed that our faces would become paralyzed….”

In preparation for the move, he sent a reconnaissance team ahead to mark the trail, and then hitched up the wanigans and sleds to the tractors and set out. Although the trail had been marked, blowing snow often reduced visibility and the trail was lost. When things went well, 40 to 50km was considered a good days run. After eight days, the cat-train arrived at Tigvariak. Because all was covered with ice and snow, it was very difficult to find the designated camp site and the equipment and supplies that had been cached there. Five trips by cat-train were required to remove all supplies from Barter Island including the four LCMs that had been placed on cradles at the end of summer. An interesting but sometimes dangerous phenomena of the polar regions is the occurrence of white-outs, a situation occurring when sky, snow, and ice all take on the same hue causing a human observer to lose his sense of direction as well as sense of up and down. Roy Sylar, a civilian geodesist, described such a situation that occurred while crossing a stretch of sea ice: “… the motor of our vehicle started to labour, then went into a stall and we started rolling backwards, finally coming to rest. To say the least, this all came as a surprise since there was no visible indication we were on anything except level sea ice. Harley stepped out and proceeded ahead to see if we could identify what we had come upon. As he went forward he rose up towards the sky until he lost his footing and came sliding down to end up near where Gene and I sat. As it proved out we had started to mount an invisible iceberg standing some twenty or twenty-five feet above the surrounding surface. Even after circling the area, depending on motor speed to tell us whether or not we were on the level, we were not able to make out the berg….”

After building the camp at Tigvariak Island, the field party commenced geodetic work using an assumed geodetic position and an observed azimuth for a start point. Thence a four-mile baseline was measured across the ice of a frozen bay. From that base the triangulation network was extended east and west from the island. Primary transportation for the geodetic parties was by weasel. This work came to a halt in mid-May with the melting of sea and lake ice making travel nearly impossible. Work began on readying the LCMs and establishing Shoran electronic navigation stations for controlling the hydrography. Besides installing a fathometer and navigation equipment, the boats were painted bright orange in order to help find them in the event of breakdown or other emergency. By mid-July the hydrography was begun. Hydrography was carried to the edge of the ice barrier, a few km offshore.

For the next five years the basic routine of the field parties was to fly into the work area in mid- to late-winter, move camp if necessary, conduct geodetic operations and then hydrographic operations prior to evacuation in the late summer and early fall. The surveyors faced multiple hazards including intense cold ranging to -45 degrees Celsius, the occasional polar bear, rotten ice, near zero visibility both during white-outs and fogs, shifting ice fields, and the shear isolation of their working area in the event of medical emergencies.

Roy Sylar, as noted above, was an astute observer of other natural phenomena. Among the things he noted that ultimately had great importance were oil seeps: “A curiosity of the Arctic plain is to see oil bubbling from the ground in sub-zero weather. A place this can be witnessed is at Simpson Seep near Smith Bay. Another is on the banks of the Kuparuk River near Prudhoe Bay. While camped at MacIntyre Point at the entrance of Prudhoe Bay, in 1949, we had to travel many miles to find clean ice to melt for domestic use because the frozen ponds and streams in the immediate vicinity were contaminated with seeping oil.” He was seeing manifestations of North America’s largest oil field, the Prudhoe Bay Field which has produced over 12 billion barrels of oil since 1977. He also observed the migrations of the great caribou herds with the accompanying packs of wolves harrying the stragglers, be they calves or the old and weak. Sylar also noted atmospheric phenomena such as mirages, sun dogs, and multiple rainbows.

The geodetic and hydrographic surveying of the Alaskan Arctic was a difficult endeavour. In spite of the hardships, Robert Earle wrote: “While this was the most rugged assignment I ever had, it was also the most interesting in that many types of problems arose to challenge one's attention and ingenuity. In spite of working under extremely adverse conditions, most of the men … would volunteer year after year to return to the Arctic for duty.”

Editor’s Note: This article could not have been written without reference to Roy Sylar’s “Reminiscences of Four Years in Arctic Alaska”, Robert Earle’s speech “Arctic Field Party Work” and conversations with and photos taken by Rear Admiral Harley Nygren, NOAA Corps (ret.).