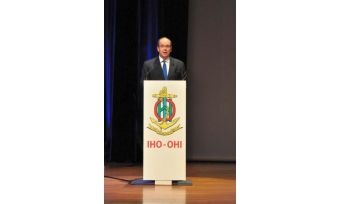 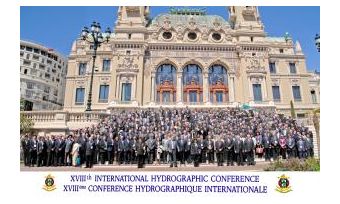 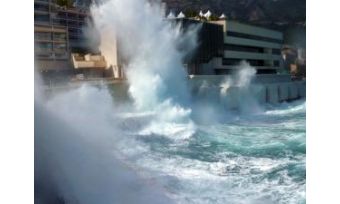 The Conference was held in the main hall of the Auditorium Ranier III in Monaco from 23 to 27 April 2012 which had been conceded to the IHB by the Government of the Principality. In that same building were put in place two exhibitions: the IHO Member States (IHO MS) cartographic exhibition (27 exhibitors) and the Hydrographic Industry Exhibition (27 Exhibitors including UKHO).

Responding to the invitation of the IHB, the following MS sent their research vessels: China (RV Qian Sanqiang), Russia (RV Donuzlav), Spain (RV Tofiño) and the United States (RV Bruce Heezen). France sent the Frigate La Fayette. On board of each of those vessels a reception was offered to the delegates during the week.

Of the 80 IHO Member States, 72 were present at the opening of the Conference. This became 73 on Friday 27 when Argentina sent a diplomatic representative from the Embassy in Paris for the election of the new Directing Committee.  The IHO MS not present were: the two suspended States (Democratic Republic of Congo and the Dominican Republic) and Cyprus, Guatemala, Syria, Tonga and Trinidad and Tobago.
The President of the Conference (who had been designated well before the Conference by the IHO MS) Mr Janis Krastin (Hydrographer and head of Maritime Administration of Latvia), took over the chairmanship of the Conference from the beginning of the Opening Ceremony. Following a proposal of the UK, Captain Patricio Carrasco (Hydrographer of Chile) was elected as vice president . The dignitaries invited to the ceremony, in the presence of Albert II Prince of Monaco, were: Mr. Michel Aymeric (France Secretary General of the Sea), Ms. Maria Damanaki (Commissioner for Maritime Affairs and Fisheries of the European Commission) and Professor Georg Gartner (president of the International Cartographic Association).

In his speech Vice Admiral Alexandros Maratos (president of the IHB Directing Committee) made a summary of all the achievements of the IHO in the past five years pointing out in particular the production of the new standards such as the S-100 (capture and transfer of hydrographic and geospatial information) and the new edition of the S44 (Standards for hydrographic surveys) . Mention was made also of the Arctic Ocean where, as a consequence of the increase of ice free conditions, there is an urgent requirement of hydrographic surveys. Emphasis was also put on the increased but not complete production of the Electronic Navigational Charts (ENCs) to be displayed on ECDIS which will become compulsory from this year on board of SOLAS vessels.

Mr. Aymeric pointed out the hydrographic engagement of France that has responsibilities in almost all the oceans and seas. Ms. Damanaki explained the interest of the European Commission for bathymetry. She subsequently signed a Memorandum of Understanding IHO/European Commission with Admiral Maratos. This was followed by the signing of the MOU IHO/ICA by Professor Gartner.

The Sovereign Prince of Monaco, Albert II, in his speech confirmed the commitment of the Principality to supporting the IHO. He put emphasis on the need of hydrography in supporting most sea activities. He remarked that 2012 is marked by two important anniversaries: the 30th anniversary of the signing in Montego Bay (Jamaica) of the United Nations Convention on the Law of the Sea (UNCLOS) and the 20th anniversary of the United Nations Framework Convention on Climate Change adopted in the Rio Summit of 1992. The Prince said that while attending the next Rio Conference, in June this year, he will commit Monaco to the defence of the sea environment.

After having officially opened the XVIII IHC, Prince Albert briefly visited the Industrial and the Cartographic exhibitions. It was a pity that his tight agenda did not allow him to see all the stands and greet all the exhibitors who would have been pleased to salute a Prince who follows the tradition of his ancestors so well.

When hearing the summary of the corporate business (which is the IHO Work programme no.1), the delegates were given a comprehensive picture of what the IHB proposed and the MS approved the reinforcement of the liaisons with the parent organisations (UN, ISO, ICA, FIG, European Commission) and in particular with IMO for the implementation of a number of regulations contained in Chapter V of the SOLAS Convention as the provision of Navigation Charts’ coverage and the dissemination of Maritime Safety Information.  As far as the ratification of the amendments of the IHO Convention (as it was approved in 2005) there are still 13 ratifications missing. This delay also affects the procedure of recruiting new Member States that requires not only the approval of two thirds of the Member Governments but also that, after having obtained approval, the new Member officially deposits the Instrument of adhesion to the Monaco Government.

As part of the IHO Work programme 1, the situation of the Publication S-23 (Limits of Oceans and Seas) was examined. As we are aware the attempts to update the edition in force (1953) were started in 1987. Unfortunately, the work is not yet concluded mainly due to the issue of the name of the body of water found between the Korean Peninsula and Japan. The debate around this issue that took place at the Conference, did not produce any conclusions and the problem remains unresolved. The majority of the Delegations decided that S-23 has to be maintained and efforts to finalise the new edition must continue.

The situation regarding the implementation of the Work Programme 2 (Hydrographic Services and Standards) was reported on by  Captain Vaughan Nail (UKHO), chairman of that Committee (HSSC). Among the standards, the S-100 (IHO Universal Hydrographic Data Model) should be noted, which is the basis of the IMO-IHO initiative called e-navigation (see the interview with Captain Gurpreet Singhota in Hydro International  of May 2012). The robust support given by the industry to such important standards and to the many other IHO standards should also be mentioned here. This was given ample attention in the Conference documents. In fact, industry representatives work within many sub-committees devoted to the standards. It is hoped that in the future the voice of the industry can be heard also during the Hydrographic Conferences.  The report of HSSC was well received and approved by the Conference.

In the report made by the chairman of the Interregional Coordination and Support Committee (Engineer General of the Armament Gilles Bessero France) the capacity building subject was the most commented on and widely discussed. Since the last ordinary conference (2007), the IHO has increased the efforts to enhance the capacities of the hydrographic offices of the emerging countries. The capacity building fund of the IHO was increased to also include financial support to the Republic of Korea. A number of training courses were granted to more than 180 hydrographers of many countries. During the discussion, a delegation requested to look for more concrete results of capacity building and another requested that training should be given locally as far as possible. Both indications will be taken into consideration to ameliorate the effectiveness of this essential IHO activity. Regional Hydrographic Commissions will promote the capabilities’ enhancement of the nations, in their areas that need it.

In giving the report about the IHB finances, the IHB president pointed out that since 2007 the value of the share (which is the base for calculating the Government’s contribution) remained unchanged and that the financial status of the IHB is healthy.

The Conference also examined some proposals originated by:

- Japan: Revision of the resolution on the IHO response to disasters. This proposal was made based on the experience of the Tsunami that affected Japan in Spring 2011 and was approved with slight modifications.

- United Kingdom: Requirement for increased technical resources at IHB. The proposal will be examined by the IHB as it may affect the budget and MS are generally not prepared to increment their contributions.

- United Kingdom: resolution on the importance of resolving ECDIS Display Issues. This proposal, related to the anomalous behaviour of some ECDIS systems, was extensively discussed as it may cause the ECDIS machine to not correctly display the ENCs.The subject will be looked into jointly by IHO and IMO.

- USA: Amendment of IHO General Regulations to include a statement about the position of the candidates for the post of director. The proposal was accepted with slight modifications and will be applied at the next ordinary conference (2017).

- IHB: Global Status of Hydrographic Surveys. The IHB remarked that the quantity and coverage of good hydrographic data is mostly unsatisfactory and requested that IRCC, HSSC and the IHB DC co-operate in enhancing the collection of hydrographic data worldwide. The proposal was generally accepted as it constitutes one of the main reasons for IHO existence.

On Friday 27 April, the heads of the National Delegations voted for the election of the Directing Committee for the next quinquennium. The candidates were those that appeared in the HI of March-April 2012: Captain Robert Ward Australia, Captain Rachid Essoussi Tunisia, Engineer General of the Armament (Admiral) Gilles Bessero France, Rear Admiral Mustafa Iptes Turkey, Captain Wesley Cavalheiro Brazil, Vice Admiral Bola Rao India, Captain Floor de Haan The Netherlands and Captain Vaughan Nail United Kingdom.   Captain Abri Kampfer South Africa  withdrew his candidacy before the Conference. All candidates are highly qualified hydrographers who served extensively in their countries and have extensive experience in the IHO business.  The eligibility committee had no doubts about declaring them all eligible to the three posts of IHB director.

Amongst the eight competitors, the Member States selected Captain Robert Ward Australia (presently IHB director) as president of the IHB DC , Rear Admiral Mustafa Iptes Turkey as director one and the Engineer General of the Armament Gilles Bessero France as director two. The Conference also attributed the cartographic exhibition prize to the Republic of Korea with Japan and France finishing in the second and third position.

In closing, the Conference delegates clearly manifested their appreciation to Mr Janis Krastin who so well presided the Conference, to the leaving IHB president VA Alexandros Maratos (Greece) and to the leaving IHB director Captain Hugo Gorziglia (Chile) for the tremendous work carried out during their two mandates. The three new elected directors also took the floor to thank everyone for their appointment and to indicate their priorities.

At the end of the present quinquennium one can say that the IHO effectively moved forward in many areas among which should be mentioned the technical progress, the reinforcement of ties and co-ordination with the parent organisations, the enhancement of the activities of the capacity building and the ever growing involvement of the industry in the development of the IHO standards. All this has been made easier by the support that the Government of the Principality and the Prince of Monaco himself continuously give to the IHO.

The way ahead for hydrography is a never ending one; the present forces of the IHO are well determined to proceed along that path. Once the amendments to the IHO Convention enter into force  (thirteen ratifications are still missing) it will be easier  to recruit new Member States thus enhancing the strength of the IHO and making stronger the voice of the hydrographers of the developing countries.  Being members of an intergovernmental organisation can give the hydrographers of those countries good arguments for asking and obtaining from their Government the means to comply with the international requirements of providing effective hydrographic services.

Note: all the Conference documents can be read on the website of the IHO.