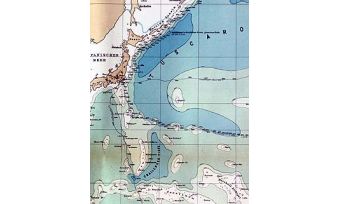 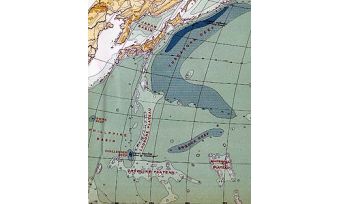 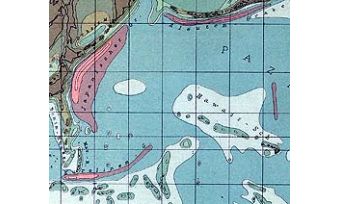 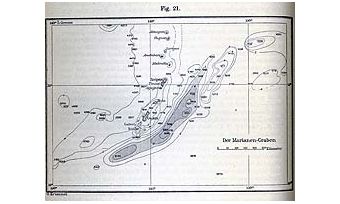 Thirty Years of Discovering the Mariana Trench On 23 March 1875, HMS Challenger sounded in 4475 fathoms at latitude 11°24N, longitude 143°16E to the southwest of the Mariana Islands and north of the Caroline Islands. Because this great depth was unexpected, the Challenger scientists sounded twice to ensure the accuracy of the sounding. Occasionally this depth has been reported as the greatest valid depth known up to that time, but in fact that honour fell to the USS Tuscarora which had sounded in 4655 fathoms in what is now known as the Kuril Trench in 1874.

The Challenger, on the other hand, did have the record for the deepest bona fide observed depth for close to a year, having sounded in 3875 fathoms on the north side of the Puerto Rico Trench in 1873. The Challenger sounding recorded between the Caroline and the Mariana Islands, however, was the first sounding that hinted at extraordinary depths in this region and ultimately led to the discovery of the Mariana Trench and the Challenger Deep.

Given that the Challenger sounded on the flank of the deepest trench of the world ocean in 1875, we ask how long it took for the existence of the trench to be known. No additional soundings in the area of the trench were made for the next 24 years. Despite this, four maps were produced between 1877 and 1900 that showed various configurations for the seafloor in the vicinity of the Mariana Islands.

The first of these maps was published by the great German geographer Augustus Petermann with the title Tiefenkarte des Grossen Oceans as Map 7 of Petermann’s Geographische Mittheilungen for 1877 (Figure 1). This was an innovative map as it was the first bathymetric chart of the Pacific Ocean. It depicted both elevations and bathymetry, and Petermann named many of the large features of the Pacific Ocean. With the exception of the names Telegraph Plateau (named for a non-existent feature roughly congruent with the Charlie Gibbs Fracture Zone) and Middle Ground (the earliest name of the Mid-Atlantic Ridge) which were published on Matthew Fontaine Maury’s 1858 bathymetric map of the north Atlantic Ocean, these were the first named features of the deep ocean floor. Among the named features was a Challenger Tiefe that, based on one sounding to the southwest of the Mariana Islands, wrapped around the eastern side of the island chain in a somewhat bloated version of the Mariana Trench. It would be thirty years before another map came this close to the truth.

The next two maps were produced by John Murray, the first in 1895 (Figure 2) and the second in 1899 (Figure 3). The 1895 map was published with the Challenger Reports. This map shows a small circular area enclosed by the 4000 fathom curve limiting the area of deep water to the near vicinity of the Challenger 1875 sounding. This area is designated the Challenger Deep and has the accompanying note: “Deepest sounding taken by Challenger”. There is no indication of a linear deep paralleling the Mariana Islands. In the Tuscarora Deep (today’s Kuril Trench), Murray graciously acknowledged “Deepest authentic sounding known”. If Murray had published this map one year later, the honour of observing the deepest depth would have passed back to the British as Commander Andrew Balfour of HMS Penguin sounded in 5155 fathoms in the Kermadec Trench at 30°27.7S 176°39.0W on 31 December 1895. There is a delightful account of this sounding operation written by Vice-Admiral Boyle Somerville in the October 1927 Blackwood’s Magazine entitled The Deepest Depth.

Murray’s 1899 map was published in The Scottish Geographical Magazine and accompanied the article The Deep Sea. He contoured the Challenger Deep as a slightly larger feature but arcuate and concave to the southwest. This supposed feature was oriented such that its easternmost part was in the embayment between Ulithi Atoll and the western Caroline Islands and wrapped around Ulithi towards the northwest. This map was published the same year as Alexander Supan’s Tiefenkarte des Weltmeeres. Supan’s map was notable for two reasons: (1) it introduced a new system of nomenclature that named the major features of the seafloor for their association with known geographic features; and (2) it was the first map to show the true linear nature of some of the major trenches.

Although Supan’s map showed a fairly modern view of the Japan-Kuril Trench (Japanischer Graben), the Aleutian Trench (Aleuten Graben) and the Tonga-Kermadec Trench (Kermadec Graben and Tonga Graben), it showed the Caroline Trench (Karolinen Graben) extending to the east from the vicinity of the Challenger sounding of 1875. The reason Supan imagined a Caroline Trench extending along the north side of the Caroline Islands was that the Italian research vessel Vettor Pisani sounded and found depths well over 3000 fathoms north of the Carolina Islands in 1884 during its circumnavigation. This map and its nomenclature was the source of an academic feud between Murray, who named features for ships and worthy scientists as did Petermann in 1877, and a contingent led by Supan who were concerned with bringing a more consistent and rational approach to naming features based on their proximity to already known geographic entities. The principles espoused by Supan won the day, although minor features have been named for individuals and ships that were involved in the discovery of the features or for scientists and hydrographers who made major contributions to bathymetry and oceanography.

The same year that both Murray and Supan produced their maps, the US sent a number of surveying expeditions to the western Pacific for the purpose of surveying telegraphic cable routes to the Philippine Islands. This came about because of the Spanish-American War and the need to have secure lines of communication between the US and the Philippines. In November 1899, the USS Nero, a converted Navy collier, sounded in 5269 fathoms (9636m).

This was the deepest depth observed at that time and remained a record for a number of years until the German research vessel Planet sounded in the Philippine Trench. The US Fish Commission steamer Albatross also sounded in the Mariana Trench and found 8802m in February 1900 to the southeast of Guam. The cable ship Colonia sounded out a route that crossed the northern end of the trench in 1902.

Almost thirty years after the first sounding indicated extraordinary depths in the vicinity of the Mariana Islands, the trench was finally defined. The German geographer Otto Krummel published what might be the first stand-alone map of the trench in the 1907 edition of Handbuch der Ozeanographie (Figure 4). It would be another forty years before the Mariana Trench was recognised as having the deepest depths in the world ocean.

The discovery and understanding of the Mariana Trench stands as a reminder of the difficulty our professional ancestors faced not only in sounding out the ocean basins but also in understanding the configuration of the seafloor from the data obtained. With sparse soundings by today’s standards and with ingenious, yet primitive equipment, they discovered the great ridges and basins of the world ocean, delineated the continental shelves and slopes and found many of the smaller features such as seamounts and canyons. Their perseverance and ingenuity is worthy of emulation.