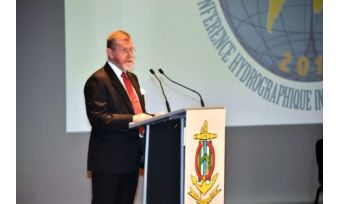 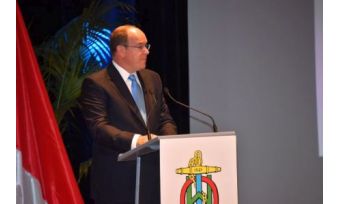 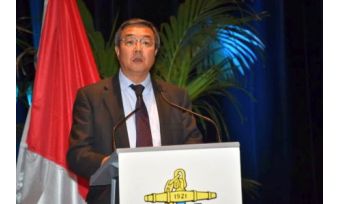 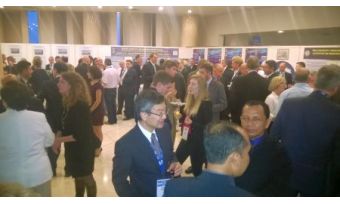 It was the first international conference organised by the IHB Directing Committee (Captain of the Australian Navy, Robert Ward, president, Rear Admiral Mustafa Iptes of the Turkish Navy, director and engineer , General Gilles Bessero, director of the French Navy), elected at the XVIII International Hydrographic Conference of 2012.

Dr Mathias Jonas (head of the Hydrographic Service of Germany) was elected president of the conference.

It was well attended with more than 400 persons, including the representatives of 65 IHO Member States (MS), 12 Coastal States (who may become Members), 20 international and national organisations and 28 industry exhibitors. Particularly important was the presence of the Secretary-Generals of IMO and IALA and the executive director of the Nippon Foundation.

After having thanked the Sovereign Prince of Monaco and the delegates for their presence in his opening address, president Robert Ward explained the aims of the conference. He also pointed out the need for Hydrographic Governmental Offices to become the national reference for bathymetric datasets that should lie at the heart of a Marine Spatial Data Infrastructure rather than merely producing charts.

The conference was then opened by Albert II, the Sovereign Prince of Monaco. He emphasised the need to continue the efforts for building the hydrographic capacities in the Coastal States that have to develop their Hydrographic Services. The Prince mentioned the traditional support to the IHO initiated by his great-great-grandfather Albert I who hosted the IHB in Monaco in 1921 and incited the IHO to continue its task: we have better maps of the Moon and Mars, he said, than of seabeds.

Dr Jonas convened that now is the time for us (IHO) to carefully consider our role in a digital geospatial data world and our role in Spatial Data Infrastructures, which are intended to ensure that geospatial data be the great enabler of the 21st century.

Dr Koji Sekimizu (IMO Secretary General) reiterated the cooperation between IMO and IHO, especially in the field of the electronic navigation and he emphasised the need to have navigational charts in the Arctic Ocean which can be navigated in the summer.

The V EIHC ran smoothly on all days thanks to the presidency of Dr Jonas. Worth mentioning:
Request by the Spanish speakers that the IHB continue providing documents in Spanish. It was noted that this is already made possible by cooperation among some countries.

The recruitment of an IHB employee to undertake the duties of S-100 Registry Manager should be given priority as soon as an opportunity occurs.

A proposal by France to make the work of committees and working groups consistent with the work programmes of the IHO was approved. The IHB will publish a summary of the results twice a year in a circular letter, which will produce adjustments in the programmes’ implementation.

The conference approved a proposal by the government of Monaco to award the Prince Albert I medal to individuals whose actions have contributed significantly to achieving the aims and objectives of the IHO. Those who serve or have served on the IHB will be excluded.

The increasing and very important contribution being made by industry was acknowledged.
A joint proposal by France and the USA to make use of crowdsourced bathymetry generated ample discussion and it was agreed to create a working group to prepare a new IHO publication on policy for trusted crowdsourced bathymetry with the support of the IOC (GEBCO).
Capacity Building was discussed in detail and the related strategy prepared by the Capacity Building Committee was adopted.

The implementation of the Worldwide Electronic Navigational Chart Database (WEND) Principles was also dealt with. When implemented, mariners can obtain fully updated ENCs for all shipping routes and ports across the world. Unfortunately, WEND has not yet been fully implemented thus generating a non-alignment with the decision of the IMO (in force for years) to make the use of the ENCs ECDIS compulsory. Following a proposal by France to remedy this situation, it was decided to task the Inter-Regional Coordinating Committee to assess the long-term consequences of not achieving full implementation of the WEND.

All presentations to which industry had been invited to participate can be downloaded from the IHO website. The Industry’s view on e-navigation was presented by Michael Bergmann (Jeppesen), president of CIRM. He pointed out, amongst others, that HO official electronic products mainly support the SOLAS market. Other markets are starting to look for new products based on high-quality HO data such as fishing fleets, non-SOLAS commercial fleets and recreational boaters. Mr. Bergmann complained about the still persisting restrictions on obtaining official data and pointed out that industry can only build solutions if data is accessible. Fair conditions for data access are accepted (i.e. Level Playing Field). He hoped that access conditions be conceptually harmonised. Data access restrictions, he stated, or exclusive use of non-classified data is counter productive.

Before closing the conference, the Montenegro delegation, the 82nd IHO Member State, handed over the flag of the nation to the president of the IHB.

Considerations that Dr Jonas made when closing the conference were:

In conclusion, it was a well planned and valuable conference. The receptions hosted by industry, the Government of Monaco and the IHB gave the opportunity to meet informally.