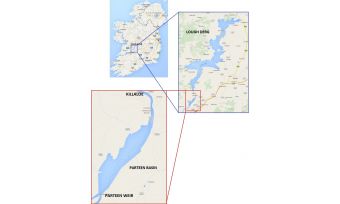 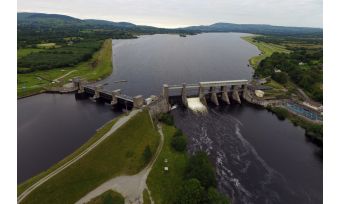 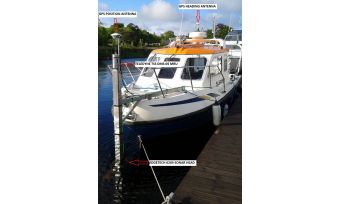 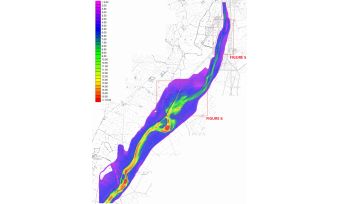 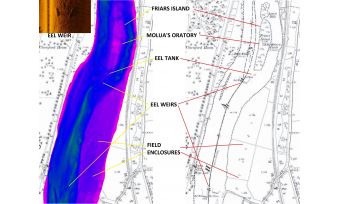 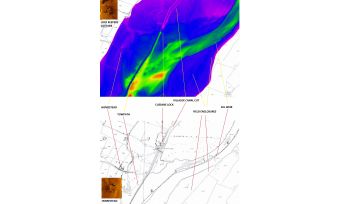 During the last week of a hydrographic survey of Lough Derg, Ireland’s third largest lake, the remnants of a preserved flooded landscape were unveiled beneath the surface with each passing swath. In early 2015, Geomara was commissioned by the utility company, Irish Water, to undertake a bathymetry and side-scan sonar survey of Lough Derg as part of the planning and design process for the Water Supply Project, Eastern and Midlands Region. This project aims to find a new water source to supply the future needs of the Midlands and Greater Dublin Area.

Over the course of a typically wet and windy Irish summer, 1687 linear kilometres were sailed. Lough Derg is located on the lower reaches of the River Shannon and covers an area of 115 km² (Figure 1). The survey area included the entirety of the lake along with the section of the River Shannon south of Killaloe Bridge known as the Parteen Basin, as far as Parteen Villa Weir. This was constructed in the 1920s forming part of the intake works for the Shannon Hydroelectric Power Station at Ardnacrusha, one of the largest civil and electrical engineering projects of its type worldwide at that time. Figure 2 shows Parteen Villa Weir with Parteen Basin to the north and the intake works to the headrace canal to the west.

The project brief was to produce a comprehensive bathymetric and side-scan dataset in order for the client to refine a 3D hydrodynamic model of the entire lake that they were developing. This model is now being utilised to assess the characteristics of a new sustainable water abstraction regime from the lake. The challenge was to efficiently acquire data which would meet the client requirements of IHO Special Publication No. 44 specification, in a body of water known locally as having large shallow bays and unforgiving submerged hazards. The only systematic hydrographic survey carried out of the lake prior to this was the Admiralty Survey of 1839 by Commander James Wolfe RN and Lieutenant RB Beechey RN published in 1843 as Admiralty Chart 5080 (since withdrawn). Estimated water depths ranged from 1 to 35m across the lake with an average of 7.5m. Much consideration was taken in choosing the right tools for this survey and with recent improvements and technological refinements of Phase Differencing Bathymetric Sonar (PDBS) systems; the EdgeTech 6205 appeared to provide a good fit for this environment.

The 6205 considerably increased the efficiency of the survey campaign while achieving the level of accuracy required. This was done by providing wider swath bathymetric coverage at an average of eight times water depth, which increased productivity in the shallow water when compared to traditional MBES. It also increased the line spacing in the nearshore environment where navigation hazards were most prevalent. EdgeTech’s Full Spectrum processing techniques allows for full coverage at nadir, minimising surface reflection and enhancing multipath suppression.

The Edgetech 6205 uses its own topside processing system and software (Discover), which was interfaced with a high performance desktop computer. Data was streamed to the processor in the sonar head where it was processed and combined into one data string before being corrected and logged in Hypack 2015 Hydrographic Survey Software.The processed bathymetric data was merged to create a grid model of the lakebed with the soundings reduced to the Irish Ordnance Datum at Malin. The side-scan data was processed and mosaicked using SonarWiz.

The MV Dolphin, a 7.4m inshore survey vessel, was deployed for the duration of the project. The 6205 sonar head was pole mounted and rigidly fixed in position via a bespoke cantilevered bow mounting bracket and frame arrangement that also facilitated mounting of the Motion Reference Unit (MRU) and GPS position antenna. These were vertically aligned around one common reference point in order to minimise offset errors (Figure 3).

Vessel and equipment positioning was provided by a Trimble SPS461 GPS with heading and positioning antennas (Figure 3).The Trimble SPS was used in conjunction with a Trimble VRS Now network RTK correction to provide centimetre level accuracy. Heave, pitch and roll corrections were provided by a Teledyne TSS DMS 05 MRU. The MRU was fully aided with position and speed readings via an NMEA data string from the GPS.

The creation of the Parteen Basin waterbody was initiated on 22 July 1929 when construction of the Shannon Hydro Power Scheme was completed and the intake sluice gates were formally opened by W.T. Cosgrave, President of the Irish Free State.

The water level at Parteen was raised at a rate of 80 – 100mm per day, raising the level of the River Shannon by 7.6m and permanently flooding an area of 3.4km².

A number of islands, farmsteads, roads, houses and drainage ditches were all inundated. The lake also submerged parts of the Killaloe Canal, including locks and ancillary buildings.

Between 1888 and 1913, the Ordnance Survey carried out a large survey of Ireland at 1:2500 scale. Extracts from this historical series, compiled prior to the construction of the Shannon Hydro Power Scheme are shown in Figure 4, overlaid by the recorded bathymetry of the Parteen Basin. The features revealed by the hydrographic survey correspond accurately with the historic record of the area.

Friar’s Island was a narrow strip of land located mid-channel, approximately 1km downstream from Killaloe Bridge. It was an area of historical significance, upon which St. Molua the leper founded a monastic settlement in the 6th Century. The remains of a tiny oratory, (3.2m x 2m) and nave (6.5m x 3.9m), built in the 9th or 10th century was the final incarnation of the monastic foundation. Once it became clear that the rising waters associated with the Shannon Hydro Power Scheme would flood the island, an archaeological investigation was completed following which it was decided to carefully deconstruct the ruins of the early church and re-erect the structure on the grounds of St. Flannan’s Cathedral in Killaloe, where they remain to this day. The raised stone and clay platform which formed the foundation for the early church can clearly be seen on the bathymetry and side-scan imagery.

A thriving eel fishery was operated on the River Shannon in the 19th and early 20th century. A series of eel weirs and an eel tank in which the captured eels were stored were located to the south of Friar’s Island as recorded on the historic Ordnance Survey Map. Eel weir structures were generally built from stone and were designed to ‘funnel’ the eels towards a series of nets across part of the river channel. These stone structures remain on the river bed.

All of these features were successfully imaged by both the side-scan sonar and bathymetric records (Figure 5). Eel fishing was a lucrative business and contemporaneous records show that significant financial compensation was paid to a Mr. Anthony Mackey in 1929 for the loss of the Friar’s Island eel fishery.

The Killaloe Canal formed part of the Shannon navigation scheme which was completed at the turn of the 19th century in order to bypass the falls, shoals and eel weirs between Parteen Villa and Killaloe, boosting trade and commerce across the region with increased agricultural exports and industrial production, particularly from the most extensive slate quarry in Ireland which was located near Lough Derg at Garrykennedy. Three locks were constructed on the canal including Cussane Lock; a large stone built double lock with a staircase pair arrangement. The lock pair was approximately 55m long but was only 5.5m wide. A raised towpath embankment was constructed along the western bank of the main river channel below Cussane Lock. The Limerick to Killaloe Canal became obsolete in 1929 when Cussane Lock, the lock keepers cottage, towpath embankment and the stretch of canal upstream of Cussane were submerged below the waters of Parteen Basin. These features can be clearly seen in the recorded data in Figure 6. The bathymetric data also shows that the lock successfully dropped the water level by 4.9m.

The survey results from the Parteen Basin revealed a detailed view of a landscape last seen before the area was immersed by the Shannon Hydroelectric Power Scheme.

A whole system of field enclosures, water channels, roads and buildings were recorded on the Ordnance Survey Maps of the time and all were inundated by the march of progress. The survey revealed these features in remarkable clarity, 86 years after they were first submerged. The results from this survey also highlight the achievement of the Ordnance Survey Mapping Campaign undertaken across Ireland in the 19th and early 20th century.