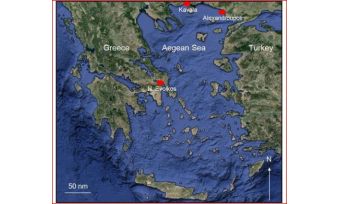 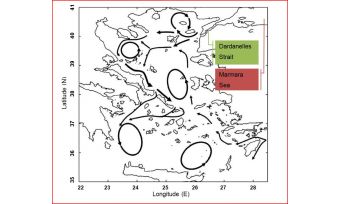 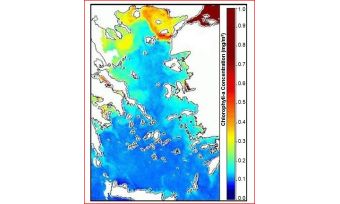 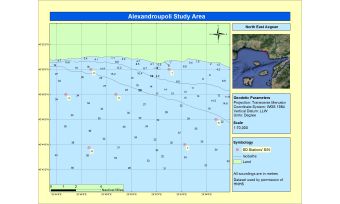 An Airborne Lidar Bathymetry (ALB) system has to cope with a number of limitations. Weather conditions (rainfall, humidity and sea state), together with bottom conditions (slope of the seabed, material type, roughness and density) are of great importance. However, the factor that dominates is water clarity. The attenuation of a beam of light by water results from two independent mechanisms; scattering and absorption. Therefore, turbidity, which is controlled by rivers’ runoffs and winds, wind/wave induced sediment re-suspension, the intensity of coastal human activity, the tidal amplitude and the structure of the water column itself, have the potential to significantly influence the maximum surveyable depth.

The Hellenic Navy Hydrographic Service (HNHS) provided an archive of Secchi depths, which were seasonally taken from 1979 to 1982, in the proximity of Alexandroupoli, Kavala and N. Evoikos (Figure 1). The values are actually the maximum depths in metres at which the disk was visible at particular stations, at midday and with prevailing winds less than 4 on the Beaufort scale.

The northern part of the Aegean Sea is affected by the Black Sea’s cold, less saline and chlorophyll-rich waters. Initially they enter the Marmara Sea and end up accumulating especially in the north-eastern part of the Aegean Sea, through the Dardanelles Strait. The way that these waters are distributed according to the local environmental factors can be seen in Figure 2. At the same time, Figure 3 shows the Chlorophyll-a concentrations throughout the Aegean and Marmara Seas. Broadly, Figures 2 & 3 are in perfect alignment.

Chlorophyll is a photosynthetic pigment found in all photosynthetic organisms including all algae. Generally, it is considered to be a good indicator of the amount of algae in a body of water. Therefore, large chlorophyll concentration implies more algae in the water, which eventually affects its clarity.

A Secchi disk can quickly and almost effortlessly provide knowledge concerning water clarity and consequently, determine the operational expected depth of ALB. The Secchi depth is obtained by lowering the disk vertically into the sea from a stationary boat and recording the depth below the sea surface at which the disk disappears from sight.

An ALB survey is capable of surveying 2 to 3 times the Secchi depth (approximately 60m). Taking into account the 60m water depth threshold, the data were analysed statistically. This permitted an assessment of this survey method’s effectiveness in the specific marine environment. Moreover, displaying the stations’ locations in a GIS (Figure 4) enabled us to compare the Secchi depths to the area depths.

The statistical analysis of the data proved that ALB surveys should take place during the summer months when water transparencies are generally better. Additionally, it was illustrated that chlorophyll concentrations affect the north-eastern Aegean earlier than the north and north-western parts. Nonetheless, the absolute values for the maximum Secchi depths in all study areas were considered to be better than satisfactory. Consequently, the inflow of Black Sea water does not prohibit the implementation of such a project.

There is no instrument or system, no matter how perfectly designed and calibrated, that doesn’t face any restrictions and can provide an absolute and undisputed measurement. Likewise, an ALB system has to cope with a number of limitations. It is a fact that, in some cases, an ALB survey is ineffective and implementation should be prevented.

The key to ALB effectiveness is considered to be water clarity. Bottom and weather conditions may not be as important but they do play an important role in the survey effectiveness.

Greece is proud that it has nearly 7,500 nautical miles of coastline. Furthermore, as a maritime country, it relies heavily on the surrounding sea environment with a variety of marine orientated industries like tourism, fishing and marine trade. This implies a great challenge and responsibility regarding coastal mapping.

Water transparencies of Greek coastal waters have proven that ALB can be effective. The need for long-term cost effective methods should trigger the Greek authorities and let airborne techniques come into play.

I would like to thank HNHS for providing the Secchi depths archive and to extend my utmost appreciation to Dr. Victor Abbott.