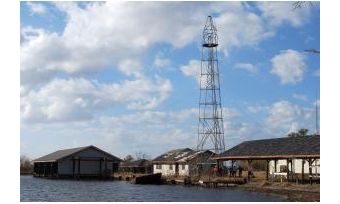 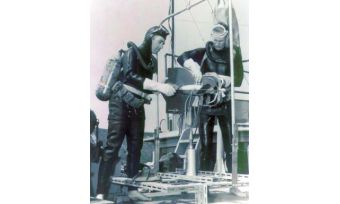 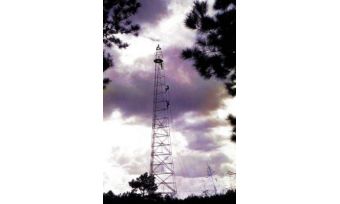 The great classical continent-spanning geodetic networks of the Nineteenth and Twentieth centuries had two major obstacles to overcome – distance and the curvature of the Earth. Distance was overcome by railroads, automobiles and helicopters. The curvature of the Earth, particularly in areas of low relief, required the building of artificial high points in order to make stations many miles apart visible to each other. In urban areas, pre-existing structures could sometimes be used. But in remote areas, the building of towers was required. The Great Trigonometric Survey of India built masonry towers as the survey had numerous labourers, but other survey organisations began developing less costly means to cope with the curvature of the Earth. In 1845, Edmund Blunt of the United States Coast and Geodetic Survey developed the concept of a tower within a tower while working in the flat marshy area of Delaware Bay. The two towers were built with no mechanical attachment between the outer tower used by the observing crew and the undisturbed inner tower that supported a theodolite. This method worked well for 80 years. A number of towers over 150 feet in height were constructed during this period with the tallest being a tower made of native timber in the Philippine Islands that was 239 feet high. By 1925, the cost of timber, labour and time to construct a wooden tower (up to 5 or 6 days) had become prohibitive. The one-time use of the wood associated with such towers was wasteful and there were areas where timber was difficult to procure.

Jasper Bilby, a long-time builder and reconnaissance man for the Coast and Geodetic Survey, devised an ingenious solution. On his travels throughout the United States, he observed many steel windmills built by Aermotor Windmill Company. In 1926, Bilby worked with Aermotor to design and build re-usable steel survey towers. These towers, like their wooden counterparts, were towers within towers. A large steel survey tower would have literally hundreds of interlocking parts; each one had to be placed exactly in the right place during both construction and tear-down operations. These towers were named ‘Bilby Towers' in honour of Jasper Bilby. By the early 1930s, experienced survey building crews could erect a 103-foot Bilby tower in less than a day. However, for a hydrographer who had never seen, nor even heard of such towers, the experience could be daunting.

In 1948, Harris B. Stewart was a brand new P-1 (lowest ranking professional grade) Hydrographic engineer just hired by the Navy Hydrographic Office, an ancestor agency of the U.S. National Geospatial- Intelligence Agency. Stewart was a marine geologist by training, having recently graduated from Princeton University. While at Princeton he was inspired to follow an ocean career by his professor and mentor Harry Hess, known for his contributions to marine geology and global tectonics. After a few weeks training in operating a Wild T-2 theodolite, he was assigned to the USS Maury, a navy hydrographic survey ship bound for the Persian Gulf. Upon arrival at Kuwait City, then an ancient-appearing city, he was assigned the job of establishing survey control. He described his experiences in his autobiography, The Unpredictable Mistress :

"Station PAL, standing for palace, was just outside the Kuwait city wall. Across the wall was the Sheik's palace. It was there that we were to erect a ninety-foot Bilby tower so we could sight across the brown flat-roofed houses to the signals at the western edge of Kuwait harbour and to an offshore island (Failakah) where we had a station. Along with four assigned crewmen, I spent many hot hours down in the bowels of the ship, blueprint in hand, collecting the many pieces of numbered steel needed to construct the tower.... The hope was that the top of the inner tower would be directly over the benchmark after we had built it up ninety feet into the air. This was the first Bilby tower I had ever seen, and the seven crewmen assigned to build it with me knew even less than I. At least I had seen the blueprint and had read the -to me- complex erector set instructions. I wasn't at all sure I could locate the top of that inner tower directly over the bench mark, so I did not put in the benchmark first. Once the towers were up, I could use the optical plumbing system to indicate where the benchmark should be placed. It seemed an easier way to do it, and it worked well.

"The first day we set the three lowest legs of each tower in large concrete footings after the 120-degree angle between each set of legs had been carefully turned off. Then we laid out the many numbered parts in numerical order on the sand. Blowing sand during the night completely covered them, but we dug them out the next morning and started assembling both towers at the same time as there were climbing rungs on one leg of only the outside tower. The sailors were not overly enthusiastic about this duty and the towers grew upward slowly as each piece was bolted into place....

"Perhaps when we finished using the tower at PAL we should have removed the wide canvas wind screen that surrounded the observer's platform. That canvas produced enough resistance to the high winds of a few weeks later to reduce that Bilby tower to a mass of twisted steel on the desert floor. We were told to remove it. Putting it up was tough enough, but it took almost three days to unbolt all those buckled steel parts and carry them to the beach where a landing craft waited to take the wreckage of my first Bilby tower back to the ship.... By the time we built one on Jazirat Faylakah (Failakah Island) near the entrance to Kuwait Harbour, I felt we were experts, and that one took only two days to construct rather than the four at station PAL. Years later I learned to my embarrassment that a team from the US Coast and Geodetic Survey can throw up a ninety-foot Bilby tower in less than five hours. Oh well, live and learn. At least the one on Faylakah was still standing when we returned to the island to dismantle it."

Stewart was also involved with the establishment of visual hydrographic signals between the primary stations. These were large tripods covered with signal cloth of various colours for ease of identification by the hydrographic survey crews. When not involved with survey control he joined the hydrographic survey crews running lines offshore. Upon return to the United States, Stewart resigned from the Hydrographic Office and ultimately obtained his doctorate in marine geology from the Scripps Institution of Oceanography. He went on to become the chief Oceanographer of the Coast and Geodetic Survey and the founder and first director of the Atlantic Oceanographic and Meteorological Laboratory of the US National Oceanic and Atmospheric Administration (NOAA) located in Miami, Florida.

Bilby towers continued serving as one of the great enabling technologies of geodesy. Thousands of towers were erected in the United States and became familiar sights to those who travelled over the Great Plains and other flat regions of the United States. They would stand for a few days and then be dismantled for re-building at another station as the triangulation arcs advanced. They were used throughout many of the British Commonwealth nations, on the Inter-American Geodetic Survey and other regions of the world. The last operational Bilby tower was erected in 1984 as the necessity for line-of-sight measurements over long distances ended with the advent of the Global Positioning System.

Twenty-five years after this last Bilby tower was built, the Surveyor's Historical Society (SHS) ( 1), an organisation devoted to preservation of the history of surveying, embarked on a quest to find an intact Bilby tower. Amazingly, a standing 64-foot Bilby tower was discovered on an island in Couba Bayou, just to the west of New Orleans. Somehow this tower had been forgotten and left standing 40 years earlier. In that time it weathered 18 hurricanes including the infamous Hurricane Katrina of 2005. Efforts to dismantle, restore, and relocate this tower to Jasper Bilby's hometown of Osgood, Indiana, have been spearheaded by officers of the SHS - Richard Leu, Chas. Langelan, and Bart Crattie. Once standing again in Osgood, this tower will serve as a fitting tribute to both Jasper Bilby and the Bilby tower - a technology that helped geodetic surveyors span continents and served the hydrographic community as well.

Thanks to Bart Crattie of the SHS who shared his thoughts and provided the impetus for this particular column through his article Mr. Bilby's Elegant Assembly - Being Both Beautiful and Sublime published in The American Surveyor, Volume 8, No. 4 ( 2). Thanks also to Dr Harris B. Stewart (1920-1997), whom I remember as a friend and inspiration.