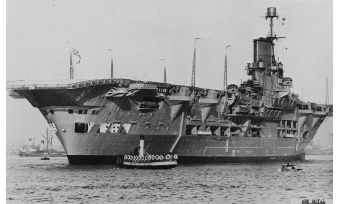 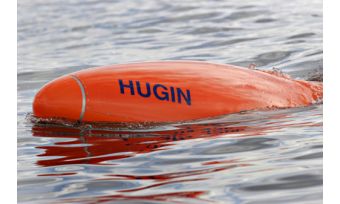 In November 1941 the aircraft carrier H.M.S. Ark Royal was returning from Malta, when it was torpedoed and sunk by a German U-boat southeast of Gibraltar. Its destruction was a devastating blow to the Royal Navy's power in the Mediterranean theatre of war and to the morale of the British people. In October 2002, nearly sixty-one years after it was lost, the remains of the Ark Royal were identified on the bottom of the Mediterranean using C & C Technologies HUGIN 3000 AUV.

In the autumn of 2002 the British Broadcasting Corporation (BBC) contracted C & C Technologies, Inc. (C & C) of Lafayette, Louisiana to conduct a search for the World War II aircraft carrier H.M.S Ark Royal. The search would be carried out using C & C's HUGIN 3000 AUV, which at the time was deployed in the Mediterranean. A key point of the project would be the investigation of a target located in 1,066 metres of water during a BBC-sponsored multi-beam survey search for the carrier. During a single dive the HUGIN 3000 surveyed this object with side-scan sonar, sub-bottom profiler and multi-beam systems. The results of this survey confirmed that the target was indeed the wreck of the Ark Royal. This article discusses the survey and its findings.

The Ark Royal (Figure 1) was the Royal Navy's first modern aircraft carrier. Unlike other carriers in the Fleet that had been converted from other types of warships, the Ark Royal had been planned from conception to be an aircraft carrier. Constructed in Birkenhead, England, between 1935 and 1938, the new carrier had an overall length of 244 metres and displaced over 23,000 tons when it was commissioned in November 1938. It was capable of speeds of up to 31 knots and could carry up to seventy-two attack aircraft. In addition to its complement of aircraft, the Ark Royal bristled with an array of defensive armament that included sixteen 4.5-inch guns, thirty-two 2-pounder anti-aircraft guns, and thirty-two 5-inch guns.

Once commissioned, the Ark Royal was assigned to the Royal Navy's Home Fleet. At the outbreak of hostilities with Germany in late 1939 the Ark Royal saw action almost immediately, its aircraft assisting in the sinking of the first German U-boat of the war, U-39. It also shot down the first German aircraft of the war. Throughout roughly the next year and a half, from October 1939 to March 1941, the Ark Royal took part in many of the major operations in the Atlantic and Mediterranean. Among these were the search for the German Pocket Battleship Graf Spree, the Norway Campaign and the destruction of the French Fleet at Dakar. In May 1941 the Ark Royal played a key role in the destruction of the German Battleship DKM Bismarck when a torpedo from one of its Swordfish aircraft severely damaged the battleship's steering.

In two years of wartime operations the Ark Royal had been attacked numerous times but had managed to survive relatively unscathed. However, on November 13th 1941, while returning from operations off Malta, luck ran out for the Ark Royal when it was sighted by Friedrich Guggenberger, commander of the German submarine U-81, who fired four torpedoes from long range at the Ark Royal and its escorting battleship. A single torpedo struck the starboard side of Ark Royal, exploding amidships, directly under the superstructure. The blast ripped a 40-metre by 9-metre deep hole in the carrier, killing one British sailor. Within minutes the Ark Royal was listing heavily to starboard. The following morning, on 14th November 1941, despite all efforts to save the ship, the Ark Royal rolled over and settled on the bottom of the Mediterranean, where it remained undiscovered for nearly sixty-one years.

The HUGIN 3000 AUV investigation grid for the BBC multi-beam target was devised to provide maximum coverage of the search area; it consisted of eighteen tracklines approximately 1,800 metres long.

The high-frequency sonar lines were designed to provide optimum sonar-strike angles by programming the AUV to pass the target from three directions. The series of survey lines were offset in increments of 10 metres from the main target area and provided coverage of a 1.6-kilometre by 1-kilometre area of seafloor in a water depth of 1,066 metres. During the survey, which took approximately 7 hours, the AUV maintained an altitude of approximately 20 metres above the bottom. Real-time acoustic links with the AUV provided the first images of the wreck. Once the survey was completed, the data was recovered and processed onboard the AUV support vessel M/V Rig Supporter. A side-scan sonar mosaic was produced and each line of data was reviewed by C & C and BBC personnel for details of the wreck site for comparison with plans of the carrier. Based on the data acquired by the HUGIN, the wreck site was confirmed to be that of the H.M.S. Ark Royal.

The sonar mosaic (Figure 3) provides an overall picture of the wreck remains. It indicates that the wreck site is strewn over nearly 0.27 square kilometres of seafloor and is oriented roughly north to south. At the northern edge of the wreck site are the remnants of the main hull. Approximately 218 metres to the south of these remains lies an extensive field of debris containing several large pieces of wreckage.

The main hull section measures 183 metres in length, roughly 61 metres shorter than the recorded length of the Ark Royal. The high-resolution side-scan sonar images of the main hull (Figure 4) revealed extensive damage to the forward section, suggesting that a portion of the bow had ripped away, along with portions of the flight deck and the superstructure. Several of the Ark Royal's gun turrets remain intact on the wreck and are visible in the high-resolution imagery. A multi-beam composite of the hull remains (Figure 5) shows the vessel sitting relatively upright, with only 10 metres of bottom relief, indicating that much of the lower hull is embedded in the seafloor. Displaced sediments visible in the multi-beam imagery provide evidence that the impact of the hull as it entered the seabed was in a south to north direction.

Lying south of the main hull by 218 metres is a 527-metre long by 426-metre wide field of debris (Figure 3). High-resolution side-scan imagery depicted a wide variety of objects scattered throughout this area, including pieces of the superstructure, flight deck remains, gun turrets and several aircraft. One of the aircraft would seem to be an inverted Fairey Swordfish biplane (Figure 6). At the southern extremity of the field is a large section of debris partially buried in the seafloor. This appears to be the remnants of the missing bow section (Figure 7) with one of the aerial lift arms still attached.

Based on the findings of the HUGIN 3000 AUV survey of the Ark Royal wreck site it is possible to speculate on events occurring after the vessel sank on the morning of 14th November 1941. The evidence suggests that as the Ark Royal sank beneath the Mediterranean it planed away in a northerly direction and continued to roll over. The superstructure and portions of the flight deck tore away as the vessel turned keel up. At about the same time, a large section of bow snapped off from the main hull, scattering debris across the seafloor as it spiralled into the bottom. The main hull continued to slowly roll as it plunged towards the bottom, eventually righting itself before crashing into the seafloor from a southerly direction.

The information gathered during the BBC survey yielded the first glimpse in sixty-one years of the wreck of one of Britain's most famous warships. This study provided insight into the last moments of this illustrious vessel and opened the door to future research opportunities.