Used for Qualification of the Seabed 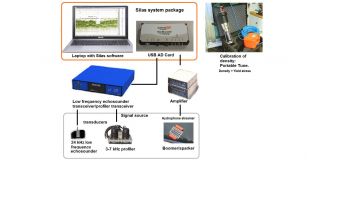 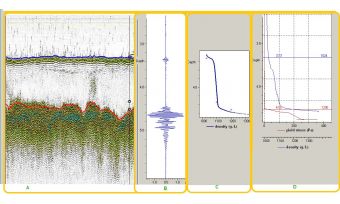 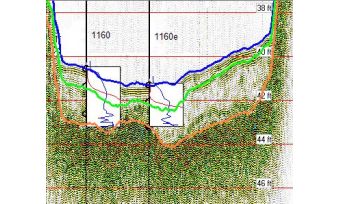 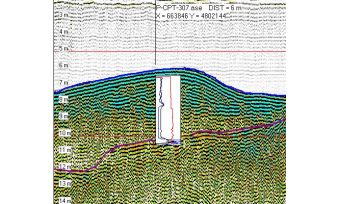 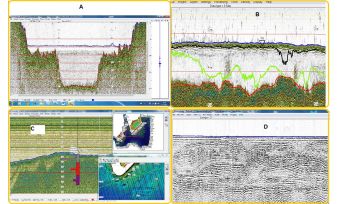 Traditionally, the upper part of the shallow seabed is investigated using low frequency echo sounders to enable safe navigation, and even lower frequency profilers for seabed structure mapping. However, the results of these systems often lack accuracy and, as a consequence, seabed properties are not known. A more accurate method, which results in seabed parameters, is obtained by the addition of the ultra-high resolution seismic sub-bottom system package Silas. It will be shown that Silas can be added to any echo sounding or profiling system. High-quality data acquisition is possible with only minor changes to standard survey practices. The data output to the survey software can range from a high-quality seabed depth to a calibrated output of seabed density parameters. Moreover, integrated verification of multibeam, side-scan, cone penetration and borehole data is also possible.

In order to achieve high accuracies, the Silas system records the full returned signal of a low frequency echo sounder with ultra-high sampling speed and accuracy. The system (Figure 1) consists of the recently developed Analog to Digital converter (USB AD Card), a laptop with the Silas software, and a standard transmitting and receiving unit (transceiver) with a signal source. A geophysical density meter can be added to the system, to enable a calibrated density level output. This can be any vertical geophysical density device, however a Tune system is recommended (Figure 1). Such a system utilises the environmentally friendly Tuning fork method, and produces density and material strength (yield stress).
The signal source consists of a transducer that is attached to a pole, mounted over the side of the survey vessel. For deeper applications, the transceiving unit can be replaced by a dedicated amplifier.
Such a set-up is used to receive signals of heavier towed seismic sources for sub-bottom registration, such as boomers and sparkers.

During a survey, several cross sections (lines) are sailed. During those lines, the transceiver sends a signal to the sound source. This is executed at a rapid rate, depending on the signal source. The signal travels through the water column and is reflected by the seabed and the strata underneath. The reflected signal is recorded using the AD converter and the laptop with Silas software, which also facilitates interfacing with all required positioning, vertical referencing and motion correction data.
Bathymetric surveys with the Silas system can either produce a standard digitisation level or a calibrated output of density levels.
The method of depth digitising does not differ from the standard digitising set-up of an echo sounder, except that there are more options to optimise the digitising settings. These settings are related to the threshold limits for detection of the upper seabed layer and the top of the more consolidated layer underneath.

The method of calibrated density level requires a calibration survey in advance, using a Silas line and a number of vertical geophysical density measurements. After this calibration, density levels are produced in real-time, performing the traditional echo sounding survey procedure. The calibration consists of an automated iterative estimate of the arriving signal power just above the seabed (Figure 2), calculating the least squares difference between synthetic seismic and true density profiles (for an explanation of this method, see C. Werner, 2012 in the More Information section). For both the standard digitising and the density level options, the later processing and validation is possible, because the full reflected signal has been recorded

The high-resolution seismics produce detailed and highly sensitive results for the upper seabed, depending on seabed composition and connected acoustical source. It is concluded that, using a 24kHz echo sounder with Silas, density changes above or equal to 0.4g/l/cm are detected. The accuracy of the density level option of the high-resolution Silas system, connected to a low frequency echo sounder, has a standard deviation of around 0.12m, compared to the density level measured by the geophysical point measurement. Moreover, an additional study by Deltares, (a hydraulic institute from the Netherlands) reveals that the accuracy of the density level of Silas is of the same magnitude as the accuracy of the point measurements used for calibration.

The new Silas echo sounder data indicate that the clear reflector underneath the seabed which is often visible in a fluid sediment situation, does not always correspond to the nautical depth. This often occurs in areas with a lack of current and minor dredging activity (Figure 3). Hence, these areas show a higher seabed strength (yield stress) of the upper (semi-) fluid sediment. Here, the critical density level calculated by Silas is often located at considerable distance above the most significant reflector, with good correspondence to the point measurements and without loss of accuracy. This also illustrates that in these situations the ’hard layer detection method’ used by echo sounders does not indicate the bathymetric depth. Moreover, such a situation emphasises the importance of the yield stress for assessment of the navigable depth and it also emphasises how the yield stress values measured by the Tune help to assess a critical density level for a certain area.

Deeper Silas data of consolidated sediments and rock, often acquired with lower frequency sources such as a profiler, boomer (Figure 5D) or sparker, can be validated against another measure for the seabed strength, namely the cone penetration test (CPT). During this test, a cone is driven into the seabed while all parameters, such as the cone resistance, are measured. The Silas system enables complete validation of the deeper layers with full CPT (Figure 4) and borehole results (Figure 5C).

The Silas package has been upgraded with a new ultra fast USB AD Card, which results in seismic records with up to 4 times more detail compared to previous versions of the Silas programme. The USB interface also makes the system more portable. Another innovation is a lighter version of the optional calibration tool (Portable Tune instead of the RheoTune), allowing for easier deployment by hand. Since the beginning of 2013, the Silas software has been extended with numerous options. The most important ones are a new user interface for the Silas density calibration, the integration with Multibeam data, CPT and Borehole information and the import and export options for the universal seismic exchange format (SEGY).

The Silas system can be connected to a large number of seismic sources, ranging from low frequency linear and parametric echo sounders for bathymetric surveys to lower frequency profilers, boomers and sparkers for deeper seabed characterisation.
The added value consists of ultra-high resolution seismic data and seabed parametrisation, such as density and nautical levels. Density and nautical levels are produced after calibration with geophysical point measurements, such as Tune sensors. Application of the Silas system with a Tune sensor also shows that a clear sub-seabed reflector does not always correspond to the nautical depth, if the silt is more consolidated and has a higher yield stress. The high flexibility to all types of sub-bottom data and extensive integration with multibeam, side-scan, CPT and borehole data makes Silas a valuable tool for further seabed classification of the shallow seabed.