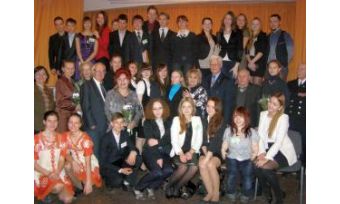 In order to stimulate young hydrographers finishing at educational institutions and who have proven to be the best, the HSR introduced two honourbale diplomas in 1995: the Diploma named after Professor A.P. Belobrov, for the speciality ‘Hydrography’ and the Diploma named after Professor V.A. Snezhinsky – for the speciality ‘Hydrometeorology’. The first honourable diplomas were handed to graduates in 2000. Since then, these diplomas have been awarded to 46 graduates.

In 2012, the HSR Council awarded honourable Diplomas named after Professor A.P. Belobrov to graduates of the Admiral Makarov State Maritime Academy (SMA) of the Russian Transport Ministry: Alexey
Orlitsky and Nikolay Timofeyev. Both have shown great initiative and diligence during their studies.

Club Acts
On 20 March 2012, a group of HSR members led by HSR president Nikolay Neronov took part in a conference devoted to preparing for the celebrations in Russia in honour of the Romanov dynasty and the 100th anniversary of the discovery of the ‘Emperor Nikolay II Earth’ by Boris Vil’kitsky.
This conference took place in the Saint Petersburg school No. 43 where ‘Historic-geographical club’ has been hosted for the past 10 years under direction of teacher Elena Nazarenko.
In the course of the conference 13 reports were made. 10 reports were presented by pupils of grades 8 - 11 of the school. They were devoted to research on the Arctic ocean seas and also to some great Russian scientists and naval commanders: Michael Lomonosov, admiral Ivan Grigorovich and admiral Stepan Makarov.
Also included were the inhabitants of the Far North of Russia and their real assistants - dogs. The cadet Andrey Saladin of the Admiral Makarov State Maritime Academy described his navigation training on the sailing vessel Mir.
At the end of the conference, HSR members and other visitors present expressed their profound gratitude to the pupils and members of the club and to its permanent instructor Mrs. Elena Nazarenko.