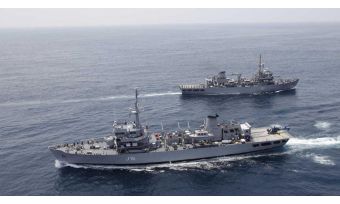 The Indian Navy's Sandhayak-class ship INS Jamuna, which recently arrived in Sri Lanka, will carry out detailed hydrographic surveys and several shore-based survey activities over the two-month deployment period, officials said last week. The project is based on a mutual agreement to carry out a joint hydrographic survey off the southwest coast of Sri Lanka, the Indian Navy said in a statement.

Over the two-month deployment period, the ship will carry out detailed hydrographic surveys and several shore-based survey activities. Navy personnel will embark the ship during the conduct of the joint survey. Additionally, they will also be provided with "hands-on survey training during every operational turnaround in port", according to an official announcement.

INS Jamuna (J16) is a hydrographic survey ship in the Indian Navy, under the Southern Naval Command. Jamuna is equipped with a helicopter, a Bofors 40 mm gun, four survey motorboats, and two small boats. The ship has the distinction of being associated with relief work in the wake of the Gujarat earthquake, Tsunami 2004, and Operation Vijay during the Kargil war (source: www.wikipedia.com).