The Team Behind the Map 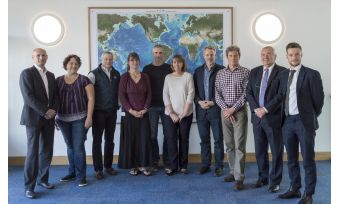 In October 2017, The Nippon Foundation-GEBCO Seabed 2030 Project, which plans to map 100% of the world’s ocean floor by 2030, held its first meeting of regional data centre heads at the National Oceanographic Centre at Southampton University. Along with the head of the global data centre, a soon-to-be appointed project director, dedicated research teams, and in partnership with The Nippon Foundation, they will be responsible for delivering the project’s mission.

The Nippon Foundation-GEBCO Seabed 2030 project will utilise four Regional Data Assembly and Coordination Centres (RDACCs). Each will be supported by a Regional Mapping Committee, and is responsible for a section of the world’s ocean floor.

The regional centres will each adopt a coherent and consistent approach for gridding their compilations, resulting in a database of cleaned bathymetric data that will form part of the Seabed 2030 global grid. Each will identify existing data and work to incorporate it into its regional grid through coordination with existing mapping projects, as well as highlighting areas for which no bathymetric data exists, so efforts can be made to map the gaps.

North Pacific & Arctic Ocean: Responsibility for this region will be handled by Stockholm University, led by Martin Jakobsson. Martin is Professor of Marine Geology and Geophysics at the University, and his current research interests are the Arctic Ocean paleoceanography and glacial history, the West Antarctic Ice Sheet, and the use of GIS and 3D-visualisation for handling and analysing marine geological/geophysical data.

Atlantic and Indian Ocean: Efforts will be coordinated from the Lamont-Doherty Earth Observatory (LEOD) at Columbia University, headed by Vicki Ferrini. Vicki completed her PhD in Coastal Oceanography at Stony Brook University, New York, and has extensive experience in using high-resolution geophysical mapping techniques to understand the processes that create and modify the seafloor.

South and West Pacific Ocean: The regional data centre is based at the National Institute of Water and Atmospheric Research (NIWA) in New Zealand. The team is led by Geoffroy Lamarche, who obtained a PhD in Geology and Geophysics from the University of Grenoble in 1987. He has since focused his research on the geological processes that affect the ocean floor around New Zealand and in the South West Pacific region.

Southern Ocean: Based at the Alfred Wegener Institute (AWI), the regional centre will be led by Boris Dorschel – a research scientist who completed his PhD on cold water coral carbonate mounds at the University of Bremen and MARUM. His research is focused on marine geology, with special emphasis on seabed and habitat mapping.

The Global Data Assembly and Coordination Centre (GDACC) will be responsible for centralised data management for non-regionally sourced data, such as that provided by industry working on global scales. The global centre will also produce and distribute the final Nippon Foundation-GEBCO Seabed 2030 grid as a final bathymetric product. It is based at the British Oceanographic Data Centre, led by Dr Helen Snaith of BODC.

Progress will be regularly reported, with a schedule of four two-day meetings agreed throughout 2018– leading to publication of the first Seabed 2030 global grid at the end of the year. While incomplete, it will pave the way for the production of the definitive map of the world’s ocean floor by 2030.