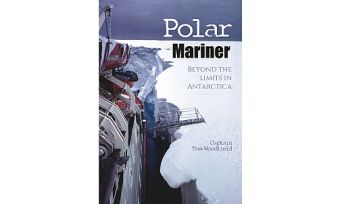 The author joined RRS Shackleton for her first voyage after she was acquired by the Falkland Islands Dependencies Survey (now British Antarctic Survey) in 1955 at the same time as the late Adam Kerr (see review November/December 2016 issue). Captain Woodfield completed 20 seasons ‘down south’, ten of which were in command of RRS John Biscoe, then the purpose built Bransfield. His is a story of confronting nature at its most extreme in support of scientific and survey programmes aimed at establishing the UK’s claims to its Antarctic Territories. This required developing confidence and competence in ice navigation in largely uncharted waters. In the process, the author also acquired and practiced skills in hydrographic surveying. His achievements were recognised by the award of the Polar Medal.

The Princess Royal’s Foreword states: “This is an account of polar exploration, seamanship and human endeavour that is rarely found in this modern age.” The exploration aspect will be of particular interest to HI readers. Initially, the available equipment, an unreliable gyro and echo sounder, the wet paper record of which was liable to freeze, only permitted occasional relatively rudimentary surveys. Boat sounding was by lead line.

Originally the ship sounded along a dead reckoning track while shooting up conspicuous shore features - islets, rocks and breaking shoals. The coast was sketched in by eye and, when ice free, from radar images. Occasionally a ‘shot up’ feature was positioned by theodolite astro observations. Following completion of an RN survey course the author participated in a boat survey with a naval party supported from John Biscoe. Subsequently, with a naval survey team embarked, the ship carried out a survey off the South Orkney Islands trailing the use of Decca HiFix.

The author rightly admired the survey efforts of the original late18th and early 19th century explorers; whose names are commemorated on today’s charts. He applauds their heroic efforts, under sail with decks frequently awash with icy water and struggling to take sights and bearings from a heaving deck and wildly swinging compass. The following, however, is a testament to the accuracy of some of their work. Shackleton grounded on a charted 4 fathom (7m3) depth and found 1 fathom (1m8). Subsequent reference to the original 1828 survey revealed that the depth in that position was indeed 1 fathom. In compiling the chart the archaic figure 1 had been incorrectly interpreted as a 4.

Unsurprisingly, having obtained good sun and star sights, Shackleton found Elephant Island to be some miles out of position. In the vicinity they also found a previously uncharted seamount. Such features aided positioning in absence of other means. A salutary passage enumerates the visual clues to the presence of shoals and underwater obstructions. These would have been familiar to earlier generations and remain valid to this day. Inside the 100 fathom (183m) line, when the echo sounder was defective, the anchor cable would be lowered to a shackle (22m) to forewarn of reducing depth. There is an implicit recognition of the benefit of Forward Looking Sonar to assist navigation. For the record, the latest BAS ship, RRS Sir David Attenborough, will have FLS.