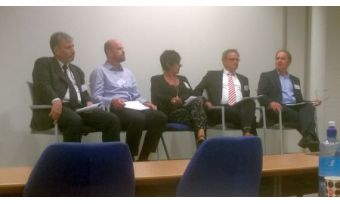 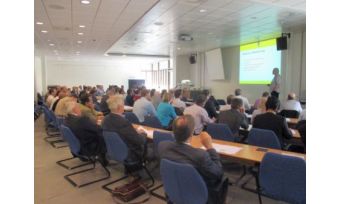 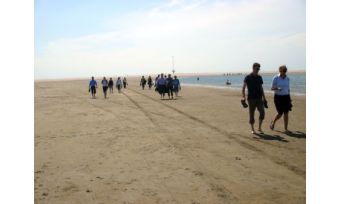 The European Marine Sand and Gravel Group (EMSAGG) held its 5th conference on 4 and 5 June 2015 in Delft, the Netherlands. More than 100 delegates from eight countries gathered at the auditorium of Deltares, that kindly hosted the event. An array of speakers updated the audience on monitoring and impact of sand and gravel extraction, technologies and developments and spatial planning aspects. On 5 June, the Sand Engine attached to the North Sea coastline in the Netherlands was a highlight and well worth a visit.

The challenges of extraction of sand and gravel off the Dutch, Belgian and UK coasts were the subject of contributions by respectively Ad Stolk (Rijkswaterstaat, the Netherlands), M. Roche (FPS Economy, Continental Shelf Company, Belgium) and Keith Cooper (CEFAS, UK). Tommer Vermaas (Deltares,the Netherlands) showed a detailed analysis of dredging and sedimentation patterns in the Maasgeul near Rotterdam, the Netherlands.

Objects in the Sand

Large objects were the subject of the next contributions: UXO was highlighted by Merijn Terlou of Abeco, the Netherlands, followed by Robert Langman of MarineSpace UK talking about identification and handling boulders. Vera van Lancker gave an insight into the status of EMODNET as a digital platform for the sharing and quantifying of information.

The link to marine spatial planning was quickly made using this ‘bridge’. Brigitte Lauwaert elaborated on the Belgian approach of planning in their part of the North Sea. Nick Everington and Olivia Thomas of Crown Estate highlighted the way in which the UK is optimising and innovating for using marine aggregates. Sean Leake (GoBe Consultants, UK) added to this the cooperation with the industry, even creating a win-win situation.

The panel discussion between the session chairs generated many questions from the audience and a lively discussion on various aspects presented during the day ensued. Especially the mapping of unexploded ordnance and the consequences of removal, and practical aspects of spatial planning were discussed regularly.
It was at that point that EMSAGG president Cees Laban concluded that the day had added to the knowledge of the participants and forged relationships between them. He emphasised after the conference: “the growing demand of marine sand and gravel and increased use of the seabed space by infrastructural works together with EU and national legislations claiming protected areas, is asking for cross border planning of the available resources, and in-depth studies of the seabed characteristics and processes. This 5th EMSAGG conference provided the audience with insight in the latest developments by speakers from the industry, institutes and governmental agencies. The great involvement of the participants during the panel discussions made this conference a great success and a step towards the key theme ‘Finding Common Ground’.”

On 5 June 2015, as part of the European Marine Sand and Gravel Conference, delegates from across Europe travelled to the Sand Engine coastal protection project on the Dutch coastline.
The day opened with presentations by Deltares scientists Bert van Der Valk and Arjen Luijendijk who outlined the initial concept, the construction process and the ongoing monitoring, analysis and research of the development of this innovative coastal protection project.

The Sand Engine is a pilot project for an innovative method of coastal protection. The Sand Engine (also known as Sand Motor) is a huge volume of sand that was applied along the coast of Zuid-Holland at Ter Heijde in 2011. The Sand Motor will gradually change in shape and will eventually be fully incorporated into the dunes and the beach, as waves and currents spread the sand naturally along the coastline.

Building with Nature is an ongoing research project that examines how to utilise natural processes and provide opportunities for nature while achieving a hydraulic infrastructure. The work in the programme is carried out by the EcoShape consortium that consists of private parties, government organisations and research institutes.