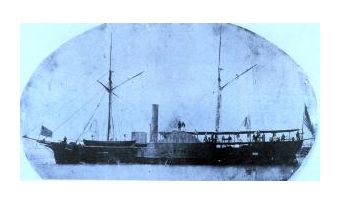 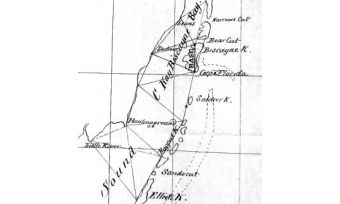 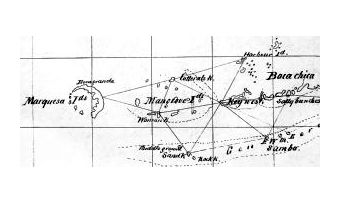 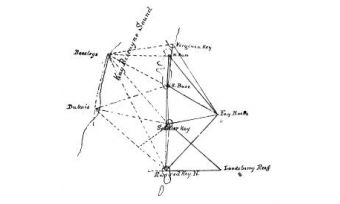 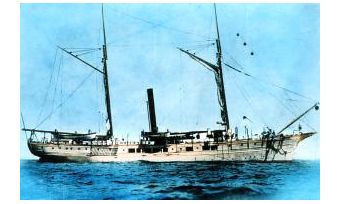 The Florida Reef became a menace to shipping in the 1500s when the Spanish discovered that the safest way home for their New World gold and silver was north through the Florida Straits. With the Cay Sal and Bahama banks to starboard, the reef, arcing along the Florida Keys, to port, and the Gulf Stream on their stern, first the treasure fleets and later thousands of European ships made the passage through the ‘New Bahama Channel’. As the territory west of the Appalachians and then west of the Mississippi was settled, American ships began to fill the Straits as well, rounding Florida on their way between Gulf and Atlantic ports. By the mid-1800s the reef lay on the margin of one of the busiest shipping lanes in the world, and the number of shipwrecks reached a vessel a week by most accounts. Losses and salvage awards approached USD2 million annually; insurance rates skyrocketed; and Key West, the closest port with a court to adjudicate salvage claims, was on its way to becoming the richest city in Florida and one of the richest on a per capita basis in the United States.

Congress called for an expedited survey of the Keys and reef, and the job of ending the mayhem fell to the US Coast Survey. Alexander Dallas Bache, the superintendent of the Survey at the time, told Congress he could do it in two and one-half years for USD160,000; it took forty years and hundreds of thousands of dollars more. The Keys were unlike anything the Survey had previously encountered. Two hundred miles of coral reefs with hundreds of islands and channels through both that were critical to navigation—all set in a tropical wilderness with the Gulf Stream coursing by just offshore. The hydrographic parties alone measured 47,000 angles; steamed, rowed or sailed more than 17,500 miles; and cast the lead over 500,000 times— a significant fraction of all the soundings made and all the miles run to make them during the first forty years of the Survey’s existence. And the work had to be done under trying circumstances. Mosquitoes, sand flies, debilitating heat, impenetrable growth, the occasional bear or panther, Seminole and Civil wars, wrecks, hostile wreckers, hardly any fresh water, no fresh food except fish, no place to pitch a tent, no place to stay but on board the small survey vessels, and nowhere to go or get mail save Key West, which was usually too far away.

If the enormity of the undertaking is the overarching story of the survey, it was equally remarkable for the budding science, hydrographic breakthroughs and creative solutions that enabled it. Bache felt strongly that the Survey should nurture and integrate related science, and its first encounter with a coral reef provided an early opportunity. Uncertain of the reef’s character and ‘intentions’, Bache wanted to know more. Would it support the screwpile lighthouses that, fresh from the design’s success in the Thames estuary and Delaware Bay, were slated to be built along its edge. Would it grow seaward and make the survey and lighthouses obsolete? Could its growth “be prevented, or the results remedied”—meaning could the reef be killed or destroyed— for the sake of navigation? Bache prevailed upon his friend Louis Agassiz, a Swiss born Harvard zoology and geology professor and one of the nation’s preeminent scientists, to provide answers. After spending the winter of 1851 aboard the Survey steamer Legare studying the reef, Agassiz deflected what may have been the first existential threat to it by telling Bache that the reef was not going to outgrow the survey anytime soon—“unless some great revolution in nature modifies the present relative level between land and sea, it may be safely maintained that the present outer reef is the final southern boundary of the North American continent”— and that, in any event, he saw no way to limit its growth beyond “the bounds which nature itself has assigned.” His advice: the reef was able to support navigational structures, and “the sooner a system of lighthouses and signals [was built] the better.” Today, all but one of those screwpile lighthouses is still in operation.

Agassiz’ charge was the practical—the ‘geological and zoological side’ of hydrography he called it. He was a taxonomist at heart, though, and found time to provide the first scientific descriptions of the coral on the reef. He pushed for more—a full blown study of the reef as part of the survey—but only saw the reef again during a deep-sea dredging cruise aboard the Survey steamer Bibb in 1869. [Figure 1] According to an account in The Atlantic Monthly, the Bibb anchored inside the reef for several days and Agassiz loaded up on coral: “when the … corals were removed from the Bibb … the steamer rose two inches. There cannot have been less than two tons of coral on her decks ….” Agassiz was a motivated collector at that point. He was battling Charles Darwin over the latter’s theories of evolution (and getting the worst of it) and hoped that new specimens from a spate of expeditions, including the cruise on the Bibb, would cast doubt on Darwin’s theories and support his own, more creationist views. There was a bonus as well. Darwin had separately theorised that coral reefs grew as oceanic land masses subsided. The Florida Reef offered evidence to the contrary and, while not particularly relevant to the main debate, it was an opportunity to rebuild credibility. Agassiz died four years later and his son Alexander, a prominent scientist in his own right, picked up the mantle, spending years studying the reefs of the world including the Florida Reef.

Even as Bache was beginning to wonder whether he could get rid of the reef, Survey assistant Ferdinand Gerdes was trying to figure out how to triangulate the northern end of it to give the hydrographic parties the reference points they needed. The baseline on nearby Key Biscayne was nearly in line with the axis of the northern Keys, so that signals on their ocean/reef side, if they could be seen from the baseline at all, failed to form angles large enough to measure. To make matters worse, there were no small keys on the reef where signals could be built like there were on the southern end, and the configuration of the channels between the northern Keys was such that, unless lines of sight were cleared through dense vegetation, signals on the mainland could not be seen from the ocean side of the islands. The dilemma is illustrated by comparing the northern portion of Gerdes’ sketch of the initial triangulation plan for the Keys [Figure 2], which provides no coverage of the reef, with the southern portion of the same plan [Figure 3], which does by making use of signals built on Sand and one of the Sambo Keys—small keys on the reef itself.

When he returned to the reef the next season Gerdes discovered that the mangrove poles supporting the signals on these southern islets had survived nicely despite being inundated during storms and high tides. Could mangrove poles be used as pilings on the reef? Gerdes found some shallow spots and used steel spikes and a crowbar to dig holes but they were not snug enough. He jury-rigged an augur, bored more holes and found that mangrove poles large enough to support durable signals seemed to cement themselves in place. This discovery allowed Gerdes to build twenty-two ‘mangrove stations’ on the reef, two of which, on Fay [Fowey] Rocks and Landsbury [Ledbury] Reef, are depicted creating the needed triangles in his sketch of the revised triangulation plan for the northernmost Keys. [Figure 4]

Gerdes was also surprised that the signals on the small keys on the reef had not been destroyed by mariners tying off to them, using them for firewood or, in the case of wreckers, tearing them down just to get rid of them. Instead, they were being used as navigational aids, and according to Gerdes’ pilot had saved more than a dozen vessels from the reef. So Gerdes decided to turn his signals into makeshift markers by varying their structure, painting them different colours and publishing their descriptions in the Survey’s Annual Report and the American Coast Pilot. These signals became more elaborate later, but for a time mariners knew, for example, that Turtle Reef was marked by a Survey signal twelve feet high that was braced six feet off the water and topped with a tin cone painted red on top and white on the bottom.

The last critical piece of hydrography in the Florida Keys involved the Gulf Stream, which ran hard and close to shore in the New Bahama Channel. Charting the reef was one thing; defining the Gulf Stream currents so that passing captains could dead reckon their way past it was another. The Survey had studied the Gulf Stream sporadically since 1845, but efforts to determine its speed and direction by comparing celestial and dead reckoning fixes, or with cans attached to a log line, were largely unsuccessful. The breakthrough came in 1884 when Lt. John Elliot Pillsbury, later a rear admiral and president of the National Geographic Society, rejoined the Survey and was given command of the steamer Blake. It had been outfitted for deep-sea dredging, and Pillsbury was able to reconfigure its hoisting engines, reels and boom to handle a 400-700 pound fisherman’s anchor bent to thousands of fathoms of steel cable so that the Blake could anchor in deepwater and strong current with relative ease. Even more importantly, Pillsbury designed perhaps the earliest accurate deepwater current metre, with cones on spokes on a shaft with a worm that actuated gears to register the number of revolutions, and a rudder attached to a compass that rotated with the current and, when raised, locked in place to show its direction. [Figure 5]

In 1885, the Blake made for the sluice between Cape Florida and Gun Cay in the Bahamas, through which 90,000,000,000 tons of Gulf Stream water passed every hour. Two seasons and 1,100 hours of observations there, another three seasons anchored on transects elsewhere in the Straits, and Pillsbury had unlocked the secrets of Gulf Stream navigation in the Keys: the location and course of its axis; the speed of the current along it; the change in velocity from axis to edge; and the monthly/ daily changes in width, speed and direction occasioned by meteorological influences and the declination and transit of the moon.

Not all of the credit goes to the hydrography, but by the turn of the century wrecks on the reef were down 90 percent and wrecking was fast becoming a distant memory.